Appel: A Canadian in the French Foreign Legion (Paperback) 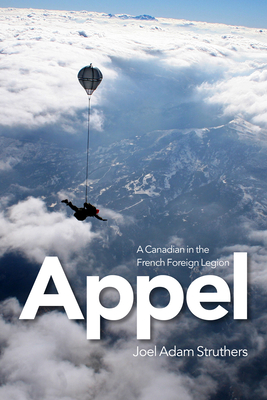 The first-hand account of the author's six years as a professional soldier and member of the French Foreign Legion's elite Group Commando Parachutistes.

In Appel, Joel Struthers recounts the dangers and demands of military life, from the rigours of recruitment and operational training in the rugged mountains of France, to face-to-face combat in the grasslands of some of Africa's most troubled nations.

Told through the eyes of a soldier, and interspersed with humorous anecdotes, Appel is a fascinating story that debunks myths about the French Foreign Legion and shows it more accurately as a professional arm of the French military. Struthers provides insight into the rigorous discipline that the Legion instills in its young recruits, who trade their identities as individuals for a life of adventure and a role in a unified force whose motto is "Honour and Loyalty."

Joel Adam Struthers is a former Legionnaire, a father, and a commercial helicopter pilot. When not preparing his children's school lunch, he is a helicopter pilot and a partner in a Canadian risk mitigation firm that solves difficult problems in challenging environments.