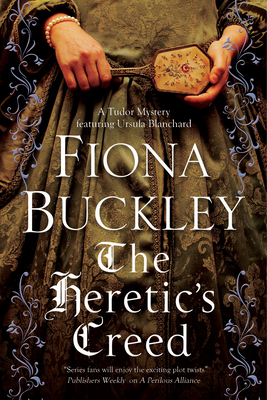 This is book number 14 in the Ursula Blanchard Elizabethan Mystery series.

"Buckley draws even the most minor characters with subtlety and skill, making the dramatic conclusion that much more satisfying." - Publishers Weekly Starred Review Ursula Blanchard must acquire a mysterious medieval manuscript in the latest enthralling historical adventure. February, 1577. Sir William Cecil has a dangerous new mission for Ursula Blanchard. He has asked her to visit Stonemoor House on the bleak Yorkshire moors, the home of a group of recusant women led by Abbess Philippa Gould. In their possession is an ancient book, and the Queen's advisor, Dr John Dee, is eager to get hold of it. However, while the Abbess is anxious to sell the book, others such as her half-sister Bella believe it to be heretical and demand that it be burned. It is not Sir William's first attempt to secure the book. His two previous emissaries vanished without trace. What happened to them - and will Ursula suffer the same fate?