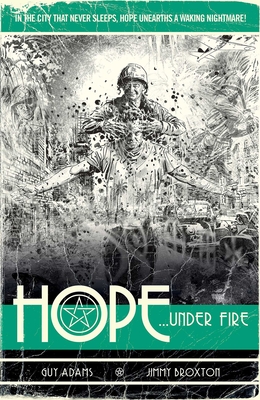 The second volume of the supernatural noir thriller!

In an alternate 1940s USA, WWII is over - but in this world, victory was secured with occult means. Now, magic is a part of everyday life, its practitioners commonplace.

Mallory Hope is one such skilled operative, though calling on the dark arts takes its toll on the user. He’s also a private investigator, hired for all manner of down ‘n’ dirty jobs.

Now his services have taken him to New York at the behest of his old army colleague, Alberto Modi, who has tried to use black magic for his own nefarious ends and to become the foremost gangster in the Big Apple. A gritty detective tale from Guy Adams and Jimmy Broxton that blends classic Hollywood noir with the supernatural!

"[Adams and Broxton] don’t disappoint... the story sucks you in and dares you to keep reading even as you dread what may happen... I can’t recommend this book highly enough." - Comics Crusaders

"grabbed me right away" - Multiversity

Guy Adams lives with genius and writer A.K. Benedict in Rochester, Kent. He’s the author of the Heaven’s Gate trilogy of weird westerns, the Clown Service books and the Deadbeat novels. He’s written countless hours of audio drama for Big Finish, from a wide range of Doctor Who titles to an adaptation of HG Wells’ The Shape of Things to Come and the original horror series Blind Terror: The Gods of Frost. In comics he writes Rogue Trooper, Ulysses Sweet: Maniac for Hire and Max Normal for 2000 AD. With his comics husband, Jimmy Broxton, he is the co-creator of Goldtiger, the sixties newspaper strip that never existed... until now.

When not hard at work desperately trying to make sense of Guy Adams’ mind bending scripts for the new series of Hope, dabbling in the Dredd-Verse for the Judge Dredd Megazine, or willing various creator owned projects into existence by the power of thought alone (including a follow up to Goldtiger, are you reading this Adams?) the artist can be found drinking fine Hellenic beers and driving German sports cars, but not necessarily in that order. He lives in Middle England, with too many books, not enough cats.