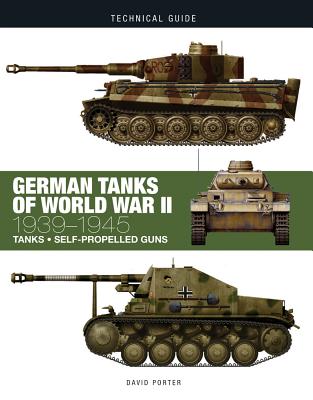 From heavy tanks to self-propelled guns, this highlyillustrated technical guide introduces all the main types of armored fighting vehicles used by Germany in World War II. Organized chronologically by type, German Tanks of World War II expertly examines the variety of armored fighting vehicles employed in the invasions of Poland, France, the Low Countries, and Stalingrad, as well as in North Africa under Field Marshall Rommel, the Normandy campaign of 1944, and at the Battle of the Bulge. The guide also covers flame-throwing half-tracks, tank destroyers, Marder III self-propelled guns, and Hummel self-propelled howitzers. Each of the 120 featured artworks displays authentic markings and color schemes, while the separate models include exhaustive specifications. This is a key reference guide for military modelers and World War II enthusiasts.

Since leaving the British Ministry of Defence, David Porter has worked on a number of research projects, contributing articles and book reviews to the BBC History Magazine, the British Army Review, and the Royal Engineers Journal.