The City: London and the Global Power of Finance (Hardcover) 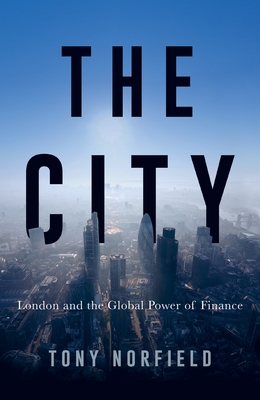 The City, as London’s financial centre is known, is the world’s biggest international banking and foreign exchange market, shaping the development of global capital. It is also, as this groundbreaking book reveals, a crucial part of the mechanism of power in the world economy.

Based on the author’s twenty years’ experience of City dealing rooms, The City is an in-depth look at world markets and revenues that exposes how this mechanism works. All big international companies—not just the banks—utilise this system, and The City shows how the operations of the City of London are critical both for British capitalism and for world finance.

Tony Norfield details, with shocking and insightful research, the role of the US dollar in global trading, the network of Britishlinked tax havens, the flows of finance around the world and the system of power built upon financial securities. Why do just fifty companies now have control of a large share of world economic production? The City explains how this situation came about, examining the history of the world economy from the postwar period to the present day.

If you imagine you don’t like “finance” but have no problem with the capitalist market system, think again: it turns out the two cannot be separated.

For nearly twenty years, Tony Norfield worked in bank dealing rooms in the City of London. For ten years he was an Executive Director and the Global Head of FX Strategy in a major European bank, travelling to some forty countries on business, negotiating with finance ministries, central banks and major corporations. He was frequently quoted in the Financial Times, Wall Street Journal, Guardian and Telegraph, and on news services such as Reuters, Bloomberg, CNN and CNBC. In 2014, he was awarded a PhD in Economics from the School of Oriental and African Studies, University of London.

“The City is a tour de force, which will soon be recognized as a formidable challenge to conventional wisdom and an essential contribution in its own right.”
—Robert Brenner, author of The Economics of Global Turbulence

“It is not every day you read a book about global finance by a banker who quotes Lenin approvingly on page two. Unlike many of those who produce Marxist critiques of financial capitalism, Norfield writes from a position of experience: he has worked in the belly of the beast, and the book is the better for it … In The City, he has done the research and pulled together the financial statistics that explain how the bloodsucking works.”
—Financial Times

“This book does the seemingly impossible: rendering finance’s mysteries transparent to the average reader, and at the same time delivering a penetrating analysis of the global economic system that will enlighten even experts. Tony Norfield has written a truly exciting and important book.”
—Paul Mattick, author of Business as Usual

“The City is a valuable addition to the critical analysis of the financialisation of our world. And Tony Norfield is an experienced and radical guide to London’s role in this process. This book should be required reading for both bankers and activists alike.”
—Joris Luyendjik, author of Swimming with Sharks: My Journey into the World of the Bankers

“With heaps of empirical research and a clear style of argumentation, he demonstrates that the City isn’t a ‘satellite of Wall Street’ as many think, but its own beast, using Britain’s imperialist privilege to extract value from the world economy. Much of the book is directed against bad arguments made by the liberal-left—the distinction between ‘productive’ capitalism and ‘casino’ banking; the populist vitriol against ‘the banks’—which Norfield believes aren't just analytically false but let capitalism off the hook.”
—Yohann Koshy, Vice

“Tony Norfield has had 20 years experience in City of London financial dealing rooms, for ten years as an executive director and global head of FX strategy in a major European bank. He went on to complete a PhD in economics at SOAS, London. Above all, he is a Marxist. It’s a perfect recipe for an excellent book on modern British imperialism and the features of global finance in the 21st century.”
—Michael Roberts, author of The Long Depression

“How many Marxists are at work in the dealing rooms of the City? Presumably they keep their heads well down. Tony Norfield is—or was—one. Twenty years a trader at the centre of the financial web, he has married the insights into the workings of the system he gained to a thorough Marxist understanding of political economy. The result is this fascinating book.”
—Morning Star

“Tony Norfield's opus The City takes on a big subject and makes it, well—big … Casts a new light on a well-researched subject.”
—Financial Adviser

“A timely and insightful book … It is an excellent read for anyone seriously wanting to consider the financial system.”
—Scottish Business Insider

“An invaluable book for anyone wishing to better understand the world of finance, how the City operates and how this relates to the broader capitalist system.”
—Tom Haines-Doran, rs21