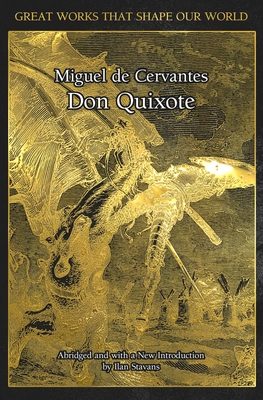 After a lifetime of reading books on chivalry in his library, the eccentric Don Quixote embarks on a quest to become a wandering knight, accompanied by his hapless servant, Sancho Panza. Don Quixote sets off on a comedic journey through medieval Spain, in a series of clumsy adventures, tilting at windmills and rescuing those even more hopeless than himself. This edition of Don Quixote is abridged, to offer a less daunting, more accessible version of the work to the reader.

FLAME TREE's Great Works That Shape Our World is a new series of definitive books drawing on ancient, medieval and modern writing. Offering a fund of essential knowledge, and spell-binding stories it satisfies every facet of human interest: scientific, philosophical, sociological, romantic, dramatic and mysterious.

Created to entertain, inform and enrich, the new series brings infinite variety to refresh the mind, presented in beautiful editions for the modern market. Each book features a new, accessible introduction, specially written for these editions, placing the book in context both as part of the new series, and highlighting its special contribution to the advancement of human understanding; they examine the significance of each work, their impact at time of publication, and their influence today.

Ilan Stavans is Lewis-Sebring Professor of Humanities, Latin American and Latino Culture at Amherst College, USA. He is publisher of Restless Books and host of the NPR show In Contrast. His award-winning books, adapted for radio, TV and theatre, have been translated into 20 languages. In 2018, he adapted Don Quixote de la Mancha into a best-selling graphic novel (illustrated by Venezuelan cartoonist Roberto Weil).