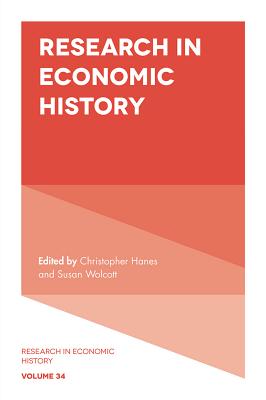 By Christopher Hanes (Editor), Susan Wolcott (Editor)
$159.99
This item is backordered. Please contact us for an estimated availability date.

This is book number 34 in the Research in Economic History series.

Volume 34 contains articles on the economic history of Europe, North America and South America and brings new analysis, and newly created datasets to address issues of interest. Two of the papers present newly constructed datasets. In Prices, Wages and the Cost of Living in Old Republic S o Paulo: 1891-1930, Ball presents a newly constructed real wage index. S o Paulo was the main destination for immigrants to Brazil in this period, but there has never before been sufficient data to analyse why. In Multiple Core Regions: Regional Inequality in Switzerland, 1860 to 2008, Stohr uses the wealth of available Swiss data on agriculture and employment to create GDP measures for subregions in Switzerland. He uses these data to argue that aggregate inequality in Switzerland was low in the initial push to industrialization because there were multiple, similar centers industrializing simultaneously, thus mitigating inequality across regions. Two of the papers gather together existing data so that it can be analysed for the first time in a consistent manner. In The forgotten half of finance: working-class saving in late nineteenth-century New Jersey, Bodenhorn uses previously unexplored consumer surveys to characterize the savings behavior of the working class. And in Heights across the last 2000 years in England, Galofr -Vil , Hinde, and Guntupalli gather all existing skeletal data for England for 2000 years to create a consistent longitudinal height series. They compare the series to height series of other regions as well as other measures of well being in England. And finally, in Monetary Policy and the Copper Price Bust: A Reassessment of the Causes of the 1907 Panic, Rogers and Payne dig into the details of copper prices to discover the link between the Bank of England's contractionary monetary policy and changes in real asset prices. Their findings have important implications for understanding the mechanisms of monetary policy.