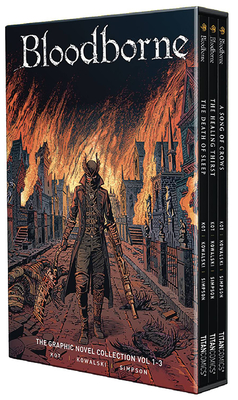 Discover the terrifying secrets of Old Yharnam in this deluxe box-set of the comic series spinning out of FROM SOFTWARE/Hidetaka Miyazaki's critically-acclaimed Bloodborne videogame! Including art cards featuring the cover art from the individual books.

Awakening in an ancient city plagued by a twisted endemic - where horrific beasts stalk the shadows and the streets run slick with the blood of the damned - a nameless Hunter embarks on a dangerous quest in search of Paleblood... his only escape from the endless Night of the Hunt...

ALES KOT is a writer, director and producer with primary focus on film, comics, television and video games. He's responsible for Image titles such as ZERO, WOLF, MATERIAL, CHANGE, THE SURFACE and WILD CHILDREN, comics which have received many accolades from media such as Wired, The Guardian, The Hollywood Reporter, Entertainment Weekly, and many others. He lives, unsurprisingly, mostly in Los Angeles.