The Iliad and The Odyssey (Hardcover) 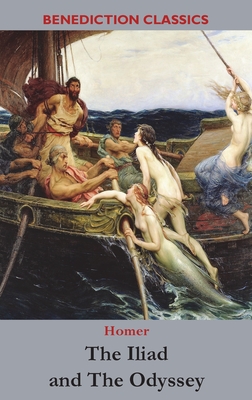 The Iliad and The Odyssey are the earliest works of Western literature and are the wellspring for much of Western culture. The Iliad, beginning

"Sing, goddess, the anger of Peleus' son Achilles / and its devastation"

describes the devastation unleashed by Achilles's rage, engulfing soldier and civilian, hero and coward, ruler and slave and even women and children. It is a story of heroes of immense pride and animal strength operating in their element. But it is much more than a great war epic.

Homer creates complex human characters. A Greek and Trojan pair, Diomedes and Glaucus, meet on the battlefield, but realizing that they have an ancestral connection, they exchange conversation and armour rather than taunts and blows. King Priam kisses the hands of Achilles, saying "I have endured what no one on earth has endured. I have kissed the hands of the man who killed my son," an act which provokes deep sympathy in Achilles, who in turn returns the body of heroic Hector which he had defiled. The nearly invincible Ajax struggles to choose between heroic glory on the battlefield and the blessing of returning to the beloved land of his fathers. The Iliad is the story of the Trojan War, but much more: it has many tender scenes, it critiques the idea of the hero and it examines the role of the Gods in history.

The Odyssey, Homer's epic tale of Odysseus and his ten-year journey home after the Trojan war is a wonderful story that has entranced generations over the last two and a half millennia. The characters and events are well known, and the form - a long journey of discovery and testing - has become a standard device in storytelling.

Odysseus is known as "polytropos," a man of many twists and turns and tricks, a man who lives by his wits. As the Greeks leave for Troy, it is Odysseus' cleverness that allows him to find the hero Achilles who is crucial to their victory. Then, after ten years camped outside Troy and the loss of countless lives on both sides, he brings the Trojan war to a dramatic conclusion with the now famous Trojan horse. One expects Odysseus' story to end with his returning home as a hero. Instead, Homer and the fates send him on another ten years of travels. This is the story of The Odyssey is not just about Odysseus' adventures on the way home, it is also about faithful marital love, and the love of home and country. Aristotle says that while The Iliad is about events, The Odyssey is about character. The word "odyssey" has entered the English language, and many regard The Odyssey as the world's most enduring narrative.

Homer was called "the teacher of all Greece," and "the leader of Greek culture," by Plato. Indeed, in the classical age, the Greeks regarded the Iliad and Odyssey as much more than works of literature; they knew much of them by heart, and they valued them as symbols of Hellenic unity and heroism but also as sources of moral and even practical instruction. Homer's works have been studied, quoted and translated in every corner of Europe and his influence on the Western imagination is immense.

This prose edition was translated by Samuel Butler, the iconoclastic English author of the Utopian satirical novel Erewhon and the semi-autobiographical novel The Way of All Flesh. The latter was published posthumously as he was afraid to publish it in his lifetime.