The Archko Volume: Or the Archaeological Writings of the Sanhedrim and Talmuds of the Jews (Intra Secus, Ancient Jewish History) (Paperback) 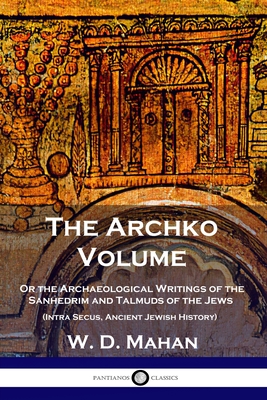 W. D. Mahan investigates Roman, Greek and Jewish writings corresponding to the time of the death of Jesus Christ, including letters apparently written by Pontius Pilate; the Roman governor who sentenced the Son of God to death.

This book combines translations to English of various ancient documents, which are purported to date to the time of the New Testament Gospels. These papers were discovered in the Turkish capital of Constantinople, and in the archives of the Vatican. The manuscripts were said to originate from the time of Tiberius Caesar, and include a long letter from Pontius Pilate to his superior, Emperor Tiberius of Rome - Pilate alludes to encountering a philosopher named Jesus, and relates the events that culminated in the death of Christ.

In the modern day, scholars consider the Acta Pilate to date from a later time than the life of Jesus, with most agreeing that the 4th century AD is the probable period of origin. The Hillel letters also date from the 4th century, and offer an insightful history of the Sanhedrim rabbis who would gather in Israel to discuss spiritual matters at the time. Hillel comments on the relationship between God and the Jews, his insightful words shedding light on Judaic worship.