The Lords of Easy Money: How the Federal Reserve Broke the American Economy (Compact Disc) 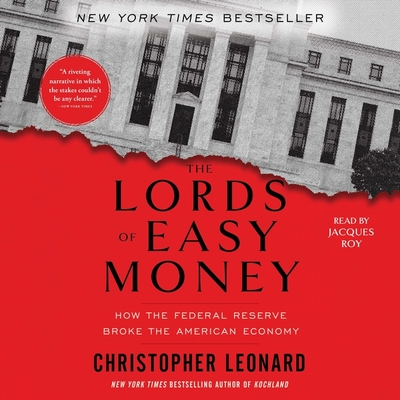 The New York Times bestselling business journalist Christopher Leonard infiltrates one of America's most mysterious institutions--the Federal Reserve--to show how its policies over the past ten years have accelerated income inequality and put our country's economic stability at risk.If you asked most people what forces led to today's unprecedented income inequality and financial crashes, no one would say the Federal Reserve. For most of its history, the Fed has enjoyed the fawning adoration of the press. When the economy grew, it was credited to the Fed. When the economy imploded in 2008, the Fed got credit for rescuing us. But the Fed also has a unique power to reshape the American economy for the worse, which it did, fatefully, on November 4, 2010 through a radical intervention called quantitative easing. In just a few short years, the Fed more than quadrupled the money supply with one goal: to encourage banks and other investors to extend more risky debt. Leaders at the Fed knew that they were undertaking a bold experiment that would produce few real jobs, with long-term risks that were hard to measure. But the Fed proceeded anyway...and then found itself trapped. Once it printed all that money, there was no way to withdraw it from circulation. The Fed tried several times, only to see market start to crash, at which point the Fed turned the money spigot back on. That's what it did when COVID hit, printing 300 years' worth of money in two short months. Which brings us to now: Ten years on, the gap between the rich and poor has grown dramatically, stock prices are trading far above what's justified by actual corporate profits, corporate debt in America is at an all-time high, and this debt is being traded by big banks on Wall Street, leaving them vulnerable--just as they were during the mortgage boom. Middle-class wages have barely budged in a decade, and consumers are buried under credit card debt, car loan debt, and student debt. The Lords of Easy Money tells the shocking, riveting tale of how quantitative easing is imperiling the American economy through the story of the one man who tried to warn us. This will be the first inside story of how we really got here--and why we face a frightening future.