The Food of the Gods (Hesperus Classics) (Paperback) 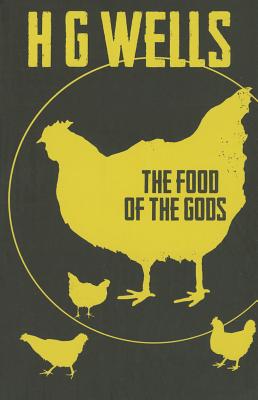 Published in 1904, this forgotten classic is sci-fi and dystopia at its best, written by the creator and master of the genre

Following extensive research in the field of "growth," Mr. Bensington and Professor Redwood light upon a new mysterious element, a food that causes greatly accelerated development. Initially christening their discovery "The Food of the Gods," the two scientists are overwhelmed by the possible ramifications of their creation. Needing room for experiments, Mr. Besington chooses a farm that offers him the chance to test on chickens, which duly grow monstrous, six or seven times their usual size. With the farmer, Mr. Skinner, failing to contain the spread of the Food, chaos soon reigns as reports come in of local encounters with monstrous wasps, earwigs, and rats. The chickens escape, leaving carnage in their wake. The Skinners and Redwoods have both been feeding their children the compound illicitly—their eventual offspring will constitute a new age of giants. Public opinion rapidly turns against the scientists and society rebels against the world's new flora and fauna. Daily life has changed shockingly and now politicians are involved, trying to stamp out the Food of the Gods and the giant race. Comic and at times surprisingly touching and tragic, Wells' story is a cautionary tale warning against the rampant advances of science but also of the dangers of greed, political infighting, and shameless vote-seeking.

H. G. Wells (1866–1946) was a prolific writer of both fiction and non-fiction. His writing career spanned more than 60 years, and his early science fiction novels earned him the title (along with Jules Verne and Hugo Gernsback) of The Father of Science Fiction. His books include The Invisible Man, The Time Machine, and The War of the Worlds.

"The creations of Mr. Wells . . . belong unreservedly to an age and degree of scientific knowledge far removed from the present, though I will not say entirely beyond the limits of the possible." —Jules Verne