Rememberings: The World of a Russian-Jewish Woman in the Nineteenth Century (Abridged / Paperback) 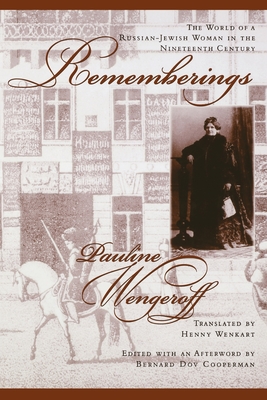 By Pauline Wengeroff, Henry Wenkert (Editor), Bernard Dov Cooperman (Editor)
This item is backordered and not currently available. Please contact us for an estimated availability date.

Studies and Texts in Jewish History and Culture, The Joseph and Rebecca Meyerhoff Center for Jewish Studies, University of Maryland, no. 9

Memoir (translated from the German) of a Jewish woman in 19th-century Russia, with scholarly introduction and analysis.

Pauline Wengeroff's memoir tells what it was like to be a Jewish girl and a Jewish woman in 19th-century Russia, as foundations of faith and tradition eroded around her No other work like this survives.

Wengeroff details her traditional Jewish life in mid-19th century Russia and then the many changes brought on by the Jewish Enlightenment.