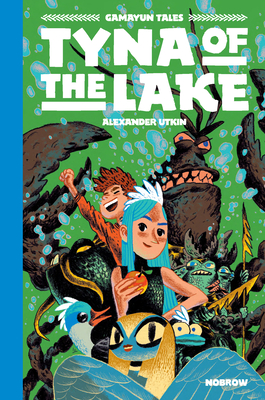 This is book number 3 in the The Gamayun Tales series.

The latest installment in the Gamayun Tales series introduces a clever heroine who has a secret even she doesn't know about.

Tyna of the Lake rescues the Hunter's son from a life of servitude to her father the Water Spirit. Their attempt to make an escape to the surface world is interrupted when they are captured by the Water Spirit and he reveals the truth about who Tyna's real father is.

An ideal book for kids who aren't quite ready for Percy Jackson and mythology fans who want a little bit more color in their stories.

Alexander Utkin is an illustrator, comic artist, designer and musician from Russia. He studied at Moscow State University of Printing Arts, graduating in 2006 with a Master of Arts. Clients include Samsung, Universal Music and WWF, among many others.

“Tyna of the Lake is the kind of book that will confound and amaze young readers.  The art style is lovingly drawn and presented on a huge storied canvas. The illustrations convey the grandiose scale of the monsters, their uniqueness and the magic of the world that lives under the lake.”
—DaddyMojo

"Utkin’s series of graphic novels based on Russian folklore features lush illustrations that alternate between crisp figure drawings and natural elements that seem to burst off the page."
—Meduza

“I’ve really been enjoying these books. They have twists and turns that feel familiar because they follow fairy tale rules, but the story itself is new to me and I don’t know exactly what’s around the next corner. The illustrations have an age-old quality to them that matches the tales.”
—GeekDad