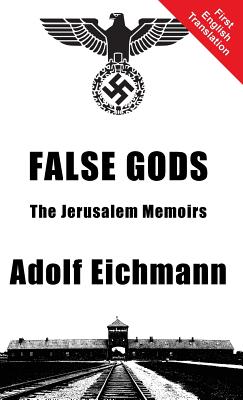 Adolf Eichmann was head of Gestapo Division IV-B4, the Third Reich's notorious Security Service, which was responsible for implementing the "Final Solution" of the European Jews in the Greater German Reich. False Gods is a book that will be controversial - not only with the Jewish community, but also with the historical "revisionists" who seek to deny the Holocaust. Eichmann's testimony not only challenges the generally accepted history of that period, but it provides much in-depth detail of the historical facts - facts which Eichmann himself was fully prepared to confirm from the surviving documents of the period that were submitted by both the prosecution and defense during his trial. In False Gods Eichmann states: "I shall describe the genocide of the Jews, how it happened and give, in addition, my thoughts of the past and of today. For not only did I have to see with my own eyes the fields of death, the battlefields on which life died away, I saw much worse. I saw how, through a few words, through the mere concise order of an individual to whom the state gave authority, such fields for the extinction of life were created. I saw the machinery of death. Grasping cogs within cogs, like clockwork. I saw those who observed the process of the work; and during the process. I saw them always repeating the work and they looked at the seconds-hand, which hurried; hurried like life to death. The greatest and cruellest dance of death of all time. That I saw. And I prepare to describe it, as a warning". Adolf Eichmann.