A Journal Of My Father (Hardcover) 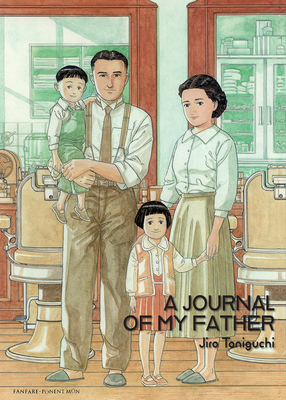 KNOW THY FATHER
The book opens with some childhood thoughts of Yoichi Yamashita spurred by a phone call at work informing him of his father’s death.
So, he journeys back to his hometown after an absence of well over a decade during which time he has not seen his father. But as the relatives gather for the funeral and the stories start to flow, Yoichi’s childhood starts to resurface. The Spring afternoons playing on the floor of his father’s barber shop, the fire that ravaged the city and his family home, his parents’ divorce and a new ‘mother’.
Through confidences and memories shared with those who knew him best, Yoichi rediscovers the man he had long considered an absent and rather cold father.

Jiro Taniguchi was born August 14th, 1947 in Tottori, Japan. He spent five years as assistant to the late mangaka Kyuta Ishikawa in Tokyo in the 60's then debuted himself in 1971 inside Young Comics. 'A Journal Of My Father' is one of several of his books which reflect on his own past which include our best selling 'A Distant Neighborhood' and 'A Zoo In Winter' from this great creator who sadly died in February 2017 aged just 69.