It's Always Been You (Paperback) 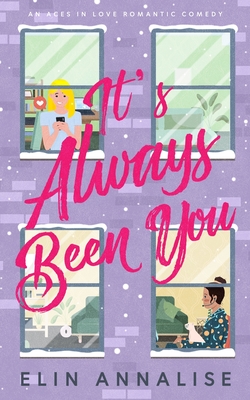 Twenty-six-year-old Courtney Davenport is loud, fun, and always the heart of a party. She's also asexual and runs a talking service for other aces who are worried about coming out.

But when her sworn enemy Sophie Sway phones the helpline, Courtney is thrown.

Courtney and Sophie have been enemies forever. Growing up at an expensive boarding school that pitted them against each other has ensured their rivalry lasted way beyond graduation. And now Sophie's not just coming out to her--unknowing that it is Courtney at the end of the line--but worse In the coincidence of the century, Sophie's also moving next door.

Furious, Courtney decides to do everything in her power to make Sophie think her new apartment is haunted, so she'll move away. But then the two of them are invited to participate in a reality-style TV show where their rivalry is turned into a game. Now, there's no way Courtney can get away from Sophie as each of them is encouraged to carry out more and more elaborate pranks on the other in order to be crowned the winner.

And the more time Courtney spends around Sophie, the more she begins to question her feelings about her...

After all, love is a small step away from hate.

Each book in the Aces in Love series can be read as a standalone; no prior knowledge of the series is needed to enjoy these stories