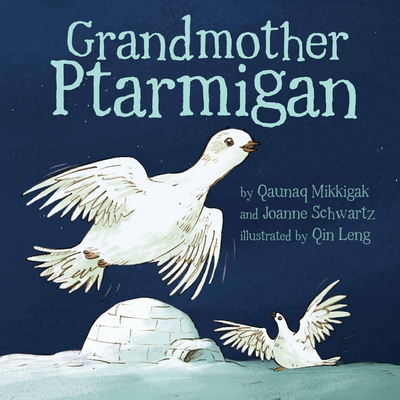 It's bedtime for baby ptarmigan, but he will not go to sleep. So his grandmother decides to tell him a bedtime story that he will never forget.
With delightful illustrations by Qin Leng, this nursery rhyme inspired rendition of a traditional Inuit origin tale is perfect for the youngest of children.

Qaunaq Mikkigak is an elder, artist, and throat singer from Cape Dorset, Nunavut. She was born in 1932 in the Cape Dorset area and grew up on the land in a traditional Inuit community. She was featured in the books Inuit Women Artists: Voices from Cape Dorset and Cape Dorset Sculpture. She has collaborated with author Joanne Schwartz on picture book versions of two traditional Inuit tales, The Legend of the Fog and Grandmother Ptarmigan. She is well known locally for her storytelling, and her throat singing has been featured on several recordings.Joanne Schwartz was born in Cape Breton, Nova Scotia. She has been a children’s librarian in Toronto for over twenty years. Joanne has written articles for Canadian Children’s Book News and other publications. Her picture books include Our Corner Grocery Store, City Alphabet, and City Numbers. She has collaborated with Inuit elder Qaunaq Mikkigak on picture book versions of two traditional Inuit tales, The Legend of the Fog and Grandmother Ptarmigan. Our Corner Grocery Store was nominated for the 2010 Marilyn Baillie Picture Book Award. Joanne lives in Toronto with her two daughters.Qin Leng was born in Shanghai and lived in France and Montreal. She now lives and works as a designer and illustrator in Toronto. Her father, an artist himself, was a great influence on her. She grew up surrounded by paintings, and it became second nature for her to express herself through art. She graduated from the Mel Hoppenheim School of Cinema and has received many awards for her animated short films and artwork. Qin has always loved to illustrate the innocence of children and has developed a passion for children’s books. She has illustrated numerous picture books for publishers in Canada, the United States, and South Korea.