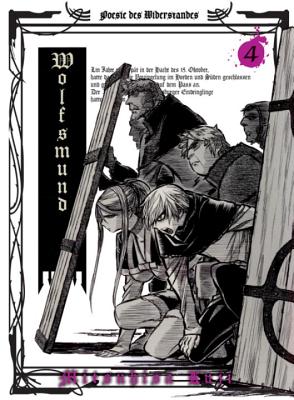 This is book number 4 in the Wolfsmund series.

With the flanks of the Wolf's Maw falling one-by-one, now the ominous fortress itself is in the crosshairs of a dual-threat of Canton allies. Lead by new forms of weapon's technology, canton rebels are willing to risk countless lives for one last chance at freedom. And with Walter Tell literally climbing the walls of the Wolfsmund, it seems inevitable that the barrier station will fall.

But before that happens, Wolfsram will unleash more than a few more devious tricks from his already deep arsenal.

Little is known about Mitsuhisa Kuji (born in 1978) however we are certain that is a pen-name for an interesting young female artist with one of the finest pedigrees in Japanese comics.

While Wolfsmund is her debut series, originally published in Japan by esteemed indie comic publisher and video game taste-makers, enterbrain!, she has been in the industry at least since 2004, mainly working on short stories with the ambition to someday have her own feature length seres. But before she began working on her own short stories, she was the assistant illustrator for two of the biggest names in comic art - Kentaro Miura (author of the best-selling series BERSERK) and Kaoru Mori (creator of the Victorian maid drama, EMMA). Since her debut work, "Samurai Dream", she has gone to draw a handful of other shorts, before launching Wolfsmund to critical acclaim in 2009.

“There is a threat of Wolfsmund being a one-trick story, where we might guess that each chapter will end in despair. However, Kuji is a smarter storyteller than that.” —The Fandom Post