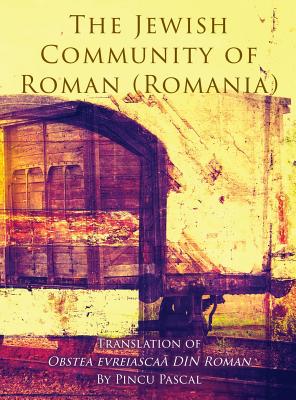 This is the Memorial (or Yizkor) Book for the destroyed Jewish Community of Roman, Romania. It was written by emigrees and survivors of the Shoah who gathered in their new homes and wrote their memories of their destroyed community.

The Romanian city of Roman is situated in the northeastern part of the country, at the confluence of the Moldova and Siret rivers, on the great road of the Siret, which long ago connected the north of Moldova with the Danube ports. The Jewish population in the city is believed to date from as early as the beginning of 15thcentury. It is believed that a wooden synagogue existed in Roman at that time, on the same lot where the Main Synagogue was standing later (in the 20th century). It was but the first of what would become 18 synagogues serving a population of more than 6,000 Jews by the beginning of the 1940s, which along with a wide range of social, educational, and cultural institutions was a measure of the vitality of the community.

In this scholarly volume, the rich portrait of the Jewish community in Roman that was about to be annihilated is painted in meticulous detail, covering every aspect of life over the centuries of its existence.