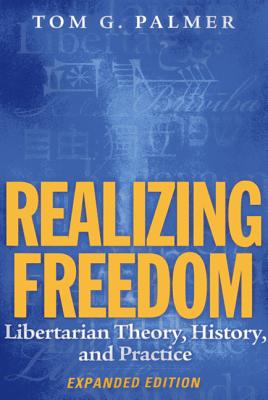 What is freedom? How is freedom related to justice, law, property, peace, and prosperity? Tom Palmer has spent a lifetime as a scholar, teacher, journalist, and activist asking and answering these questions. Now as an expanded paperback, Realizing Freedom: Libertarian Theory, History, and Practice collects his best writings. Palmer's work ranges from the theory of justice to multiculturalism, democracy and limited government, and globalization, among many other topics. These essays have appeared in scholarly journals and in such newspapers as the New York Times, Wall Street Journal, and London Spectator. His work is accessible to scholars and thoughtful citizens alike. Palmer has smuggled photocopiers and fax machines into the Soviet Union; organized movements against the draft, taxes, censorship, and victimless crime laws; and ceaselessly promoted freedom in the most hostile locations, from communist Europe and China to Iraq to the halls of academe. Whether writing as a scholar, journalist, or activist, Palmer is never boring and always challenging.

Tom G. Palmer is a senior fellow at the Cato Institute and vice president for International Programs at the Atlas Foundation in Washington, D.C.