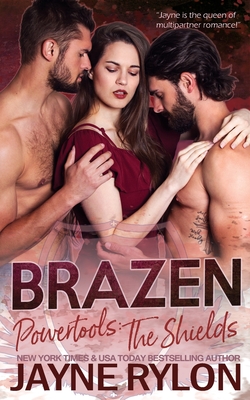 They were sent to kill him, but fell in love with him instead.

Sola doubted her instincts after her best friend and partner on the Shields security team, Aarav, acted for months like the attraction between them didn't exist. One wild night on their boss's private jet proves she was spot on even if she has no idea where their relationship will go from there.

When they're sent to assassinate the head of a money laundering operation at a brand new casino, Sola looks into the eyes of their target and her gut screams he's not the source of the evil they're hunting. Risking everything, Sola steps in between the man she loves and the one they've been sent to kill.

Sola's instant and undeniable attraction to their unintended captive forces them to investigate him further and decide-will they eliminate him, protect him, or entice him to join their intimate partnership?

Brazen is a bisexual multipartner romance in NYT and USA Today bestselling author Jayne Rylon's fan-favorite Powertools Universe. Visit your favorite characters or meet new ones in this interconnected, why choose standalone in the Powertools: The Shields MMF m nage series.