America's Outlaws and the Treasures They Left Behind (Paperback) 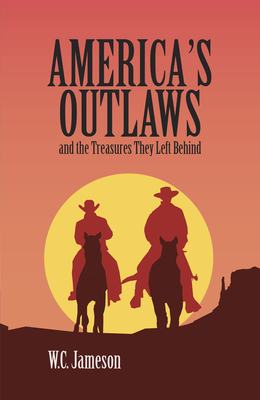 By combining the allure of outlaws from the Wild West with the mystery of lost treasure, renowned treasure hunter, W.C. Jameson has created a blockbuster collection of over two-dozen outlaw tales. Americans are fascinated by outlaws. We're attracted to their daring and adventurous escapades; we cheer them on as they break the rules and even when they escape from their pursuers.The stories in this new collection, feature an eccentric cast of misfits, bandits and adventurers like the infamous Frank and Jesse James, treacherous Dalton Gang, notorious Doolin Gang, Black Jack Ketchum, daring Texan Sam Bass, glamorous Belle Starr, bloodthirsty John J. Glanton, Mexican bandit Tiburcio Vasquez, the Apache warrior, Chief Victorio, legendary Montana outlaw Henry Plummer, Curly Bill Brocius, deadly Ella Watson, along with the pirate Jean Lafitte and more. One reason for W. C.'s enduring popularity is that he meticulously researches his stories and has actually backpacked into many of the remote sites on treasure hunting expeditions. As a result, his writing has a unique level of authenticity. In his newest compilation of outlaw stories and lost treasure, Jameson takes readers on an exciting journey through the dangers of the Wild West including treacherous desert canyons, deserted ranches on the high plains, abandoned mountain mines, lost treasure caches from railroad heists, and missing loot from bank robberies that people are still searching for today. If you love a good yarn, enjoy compelling stories from the old west or ever wonder what it would be like to search for outlaw treasure, then this book is for you. W. C. Jameson fans will not be disappointed by his latest collection of outlaw tales.

W.C. Jameson is the award-winning and bestselling author of more than seventy books and over 1,500 articles and essays. Jameson is recognized as the top-selling treasure writer in the world and he is frequently sought after for his professional expertise in treasure hunting. Perhaps he is known best, as the creator of the popular Buried Treasures of America series for August House. His success and fame as a professional treasure hunter has led to appearances on television's "Unsolved Mysteries," the Travel Channel, the Discovery Channel, Nightline, and National Public Radio. He also consulted with the production team for the highly successful feature film, "National Treasure," starring Nicholas Cage. In addition, W. C. is an accomplished songwriter and popular performer, having recorded five albums of his original music and he's even acted in five films. The multi-talented Jameson wrote the soundtracks for four films, and he wrote and performed in the musical, "Whatever Happened to the Outlaw, Jesse James?" Jameson has won numerous awards for his writing from a number of professional associations. A nationally recognized and honored author, he has served as a judge for several prestigious literary competitions. When not on an expedition or writing a book, Jameson tours the country performing his music at folk festivals, colleges and universities, concert halls, and roadhouses.