A Fortune for Your Disaster (Paperback) 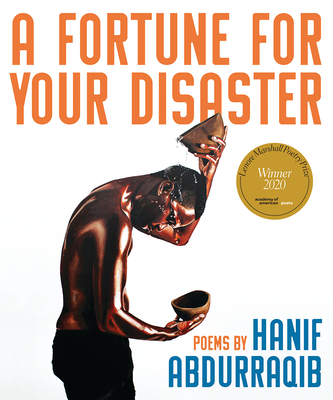 “When an author’s unmitigated brilliance shows up on every page, it’s tempting to skip a description and just say, Read this! Such is the case with this breathlessly powerful, deceptively breezy book of poetry.” —Booklist, Starred Review

In his much-anticipated follow-up to The Crown Ain't Worth Much, poet, essayist, biographer, and music critic Hanif Abdurraqib has written a book of poems about how one rebuilds oneself after a heartbreak, the kind that renders them a different version of themselves than the one they knew. It's a book about a mother's death, and admitting that Michael Jordan pushed off, about forgiveness, and how none of the author's black friends wanted to listen to "Don't Stop Believin'." It's about wrestling with histories, personal and shared. Abdurraqib uses touchstones from the world outside—from Marvin Gaye to Nikola Tesla to his neighbor's dogs—to create a mirror, inside of which every angle presents a new possibility.

Hanif Abdurraqib is a poet, essayist. and cultural critic from Columbus, Ohio. His first poetry collection, The Crown Ain't Worth Much, was named a finalist for the Eric Hoffer Book Prize and was nominated for a Hurston-Wright Legacy Award. His collection of essays, They Can't Kill Us Until They Kill Us, was named a best book of 2017 by Buzzfeed, Esquire, NPR, Oprah Magazine, and Pitchfork, among others. His most recent book, a New York Times bestseller, is Go Ahead in the Rain, a biography of A Tribe Called Quest.

It's brilliant and dizzying, but no matter how lost you get within its powerful lines, you'll finish this book having a stronger sense of orientation within this world, and within yourself.
— NYLON

There’s real energy in this book, and there’s also a compelling sense of love, longing, and loss. ... A deft collection.

Devastatingly beautiful ... a book born of blood, of heartache, of isolation, of history, of forging new paths and new endings. ... a rare accomplishment of poetic language, of music, of heart, of resilience.
— Nashville Review

What Abdurraqib has built here is a dazzling tapestry of poems.
— American Microreviews & Interviews

This is the kind of poetic stand that helps us stay alive, even in our late empire that moves to its own truth and dread. Abdurraqib is the voice to live with.
— Ilya Kaminsky

A Fortune for Your Disaster proves that, if you pay attention, Black people have defined and still define themselves for themselves amid roses and dandelions, cardinals and violets, the blues of music and police uniforms, prayer and swagger, Kehinde Wiley paintings and too many funerals, the streets of bleak cities and the fraught histories of "a kill or be killed / nation." The disaster is not us or ours but what we endure, forced and as a matter of course, whether our presence is acknowledged or not, on our terms or not. As death insists on invading our lives, we keep making more and more beauty in order to survive it. If "memory is a field / with endless graves" as disasters of the past bleed relentlessly into present and thus menace the future, Hanif Abdurraquib’s poems encompass the quiet and often lonely genius of our creativity as a means to "imagine that anything / can become us." The beauty of our excellence is soundtracked by love and violence, the "agony threaded together by the same chorus" of what we fight for and how we continue, visibly or secretly garlanded, heralded by our own painfully ecstatic voices "making [our] own ending." The fortune is us and it is ours. With a music as richly profound as we are, Abdurraquib makes it undeniably so.