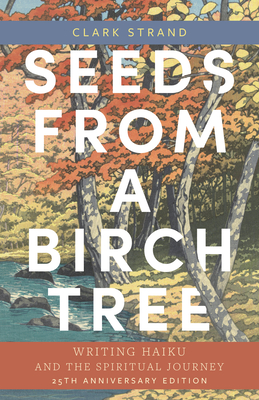 "A brilliant and engaging book on haiku, and on the state of the body and mind required in the million to one shot against producing a good one" --Jim HarrisonFirst published in 1997, Seeds From a Birch Tree introduced readers to the only form of poetry in all of world literature that makes nature into a spiritual path. Its message was simple: Haiku teaches us to return to nature by following the seasons--seventeen syllables at a time.With its mix of poetry and memoir, fallen leaves and birdsong, Seeds From a Birch Tree awakens us to what Bashō called "the life of each thing." Simple instructions guide us to the possibilities for creativity and joy hidden in plain sight in the natural world around us, giving us hope and resilience in the face of life's challenges.This Revised & Expanded 25th Anniversary Edition includes the complete text of the original classic, plus dozens of new haiku and an Afterword by the author discussing haiku for the 21st century.

Clark Strand, an accomplished master of the haiku form, has been writing poetry for fifty years and teaching haiku for thirty. A former Vice President of the Haiku Society of America, in 1996 he created the world's first online ku-kai group where poets could come together to share haiku written in English. Strand hosts a popular Haiku Challenge on Facebook, sponsored by Tricycle: The Buddhist Review, where poets from around the world are invited to submit haiku poems weekly on a set seasonal theme, the best of which are then announced on Facebook and published in Tricycle. Stand is the author of many books including The Way of the Rose, Waking the Buddha, and Waking Up to the Dark. His writings have appeared in The New York Times, Wall Street Journal, and Washington Post. He lives in Woodstock, New York.