The Stick of Joseph in the Hand of Ephraim: English Journaling Edition (Hardcover) 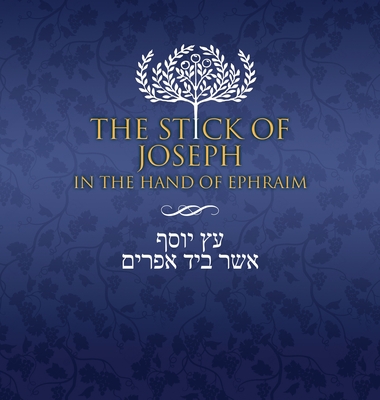 Journaling Edition] The ancient House of Israel consisted of 12 families, or tribes, named for the 12 sons of Jacob (Israel). Ten of those tribes were conquered, driven from their homelands, and scattered throughout the world. Although their bloodlines continue, they have lost their identity with the House of Israel. The remaining two tribes have retained their identity, and are now known as the Jewish people, named for the tribe of Judah.

Over 2500 years ago, the prophet Ezekiel foretold a day when the spirit of YHWH would stir the scattered remnants of Israel and restore them to life (Ezekiel 37:11-14). He also prophesied of a second scriptural record to come forth from the tribe of Joseph to Judah, in the hand of Joseph's son, Ephraim.

This is that prophesied record.

The Stick of Joseph in the Hand of Ephraimis a sacred, first-temple-period, Israelite text, written by a prophetic family from the tribe of Joseph, who fled Jerusalem in 601 BCE. YHWH led them for years in the wilderness and finally brought them "over the wall" to ancient America, in fulfillment of Jacob's final blessing to Joseph. (Genesis 49:22)

For 1,000 years, these ancient Israelites kept sacred records. When their civilization ended in destruction (420 CE), their final prophet, M'roni, hid this record in the ground, to come forth in the future for the prophesied restoration of scattered Israel to its former glory. This record is all of the following unique and extraordinary things:

- The shofar sounding to scattered Israel as YHWH's final attempt to gather His people;
- A dire warning to the USA and a cry of repentance to the state of Israel. Any nation that does not honor the God of Israel will not survive;
- An independent witness of the prophets, Mashiach, and the covenants given by YHWH to Israel;
- A record of the means whereby all mankind can, as Moses, ascend to stand in the presence of YHWH;
- An invitation to believe and receive the promises YHWH extends to those who will be His people.

This is the only Hebrew Messianic/ascension document in existence that has not been influenced by entanglements with Babylon, Greece, or Rome, because those who kept the record left Jerusalem and the Eastern Hemisphere prior to the Babylonian captivity. It is the most sublime and direct Jewish ascension text available.

This annotated Hebrew-roots English edition restores the ancient Hebraic nature of the record, to provide a clear understanding of Israel's God, His work now underway, and the coming age of Mashiach.

Whether you study religion in the Torah, Tanakh, Talmud, NIV Bible, Zohar, New Testament, Book of Mormon, Catholic writings, LDS scriptures, biblical commentary, or other holy books, this volume will inspire you to greater prophetic literacy, gifts in spirituality, understanding of history and theology, and most importantly, immerse your soul in a conversation and relationship with that God who loves, forgives, guides, and reconnects honest searchers with the tree of life.

The Stick of Joseph is a greater discovery than the Dead Sea Scrolls or the Nag Hammadi library, though it has received far less attention. It is the preeminent Messianic document in the world, untwisting the false Greek caricature known as Jesus Christ of Nazareth. It restores the basics of the complete ancient Israelite faith and culture largely absent from modern, rabbinic Judaism. The ten commandments, temples, altars, Passover, the law of Moses, patterns, evidence, and much lost understanding all come together in this invaluable journal-record of wandering Israeli Hebrews who founded a great civilization.