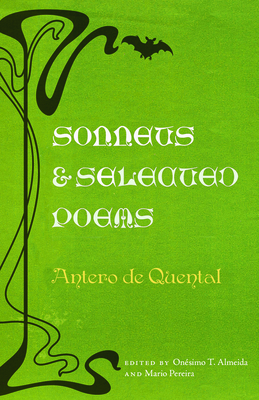 Grappling with metaphysical questions of suffering, death, and infinity, Antero de Quental’s sonnets have been widely celebrated by writers and intellectuals around the world, with Fernando Pessoa calling him “one of the greatest poets of the nineteenth century.” Irreverent and nonconformist,  Antero became the ideologue and moving spirit behind the group of progressive intellectuals known as the Generation of 1870 who rebelled against tradition and attempted to reverse Portugal’s intellectual stagnation. This is the first bilingual (Portuguese-English) edition of Antero's sonnets and poems, as well as the first to assemble the translations by Aubrey F. G. Bell, Roy Campbell, Richard Garnett, George Monteiro, S. Griswold Morley, Fernando Pessoa, Edgar Prestage, and Richard Zenith in a single volume.

ANTERO DE QUENTAL (1842–1891), born in the Azores, is widely recognized as the greatest poet of his generation.

ONÉSIMO T. ALMEIDA is professor of Portuguese and Brazilian studies at Brown University.