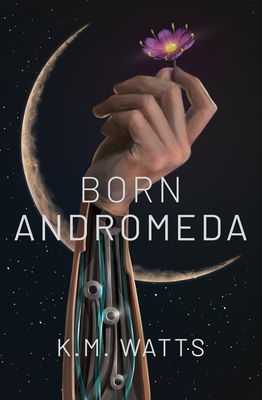 Born Andromeda, the action-packed YA debut from K.M. Watts, is perfect for fans of Aurora Rising, Daughter of the Pirate King, and Crown Chasers.

Being eighteen is difficult, especially when you’re a cyborg and heir to the entire kingdom of the Moon. Disillusioned with royal life, Princess Andromeda dreams of nothing but freedom and adventure outside the protective dome of royalty. But when her parents arrange her marriage to an Earthen prince, she is forced to put her kingdom before her dreams of independence. While traveling to Earth, Andromeda’s ship is attacked by galactic pirates led by her father's sworn enemy, the Lord Captain Bran. Taken prisoner, Andromeda realizes that her captors are unaware of her true identity and sees an opportunity: To best her enemies, she may have to join them.

K.M. Watts is a debut novelist who first dreamed of becoming an author when she won her school's Young Author Award at the age of five. She enjoys reading and writing YA fantasy and sci-fi, though she also dabbles with YA romantic thrillers. In her free time, she enjoys canyon hiking in her home state of Arizona.

"An action-packed space opera that’s not afraid of guts, glory, or going against the grain, K. M. Watts’s Born Andromeda showcases a new type of princess whose success hinges on being true to herself." —Foreword Reviews