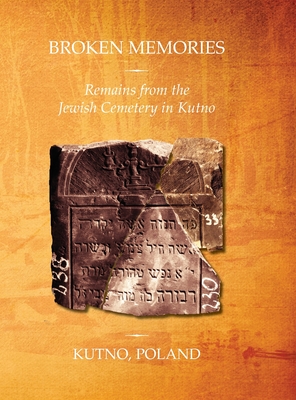 The pictures of gravestones in this book have been put together from pictures of the fragments, recovered since the 1980s by the municipality of Kutno.

Seven hundred fragments were recovered in the surroundings walls and pavement, during years of tireless work. The fragments have been cleaned, numbered, photographed and stored in a storage room in Kutno, awaiting a proper moment.

That moment came, in mid-2008, when a new group of descendants of Jews from Kutno was formed. Using

computer-scanned pictures of the fragments, it was possible to put together nearly half of them into 159 more or

less complete gravestones (matzevot). Among these, only a small part displayed a family name, as was usual on

matzevot of that time (family names were enforced on Polish Jews at the beginning of the 19th century). For the

most part, they displayed only the name of the deceased, that of his or her father, and the date of death. Comparing

the matzeva data with that of our genealogical database, it was possible to recover some of the missing information

and especially the family names. This data was added in this book.