The Vet at Noah's Ark: Stories of Survival from an Inner-City Animal Hospital (Hardcover) 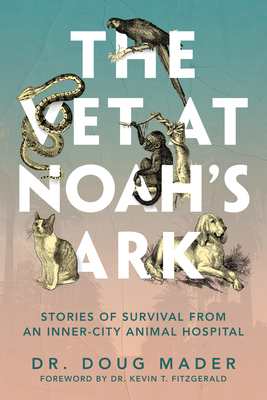 From renowned veterinarian Dr. Doug Mader comes a stirring account of his fight to protect his animal patients and human staff amid the dangerous realities of inner-city life and the Los Angeles riots--and a celebration of the remarkable human-animal bond.

The life of a veterinarian is challenging: keeping up with advances in medical care, making difficult decisions about people's beloved companions, and, in Dr. Doug Mader's case, navigating the social unrest in Los Angeles in the early 1990s. As one of the few exotic animal experts in California, he was just as likely to be treating a lion as a house cat.

The Vet at Noah's Ark: Stories of Survival from an Inner-City Animal Hospital follows Dr. Mader and his staff over the course of a year at Noah's Ark Veterinary Hospital, an inner-city LA area veterinary hospital where Dr. Mader treats not only dogs and cats, but also emus, skunks, snakes, foxes, monkeys, and a host of other exotic animals. This real life drama is set against the backdrop of the trial of four police officers in the Rodney King case, as well as the violent aftermath following their acquittal.

This is a book about survival, both of the pets that Dr. Mader and his staff try to save on a daily basis, as well as the staff themselves. Living in the harsh reality of the city, surrounded by gangs, drugs, violence, traffic, smog, and deadly riots, they must overcome and rise above, for their own survival and that of the animals who need them. This awe-inspiring account is told through Dr. Mader's riveting storytelling--as Carl Hiaasen writes, Doug is fearless and dedicated, and a damn good storyteller.

Dr. Doug Mader is a triple board-certified veterinary specialist and has been a veterinarian for over three decades. He is an internationally recognized speaker, has written three best-selling medical textbooks and numerous book chapters and scientific publications, and has had long-standing pet columns in the Long Beach Press Telegram, Reptiles magazine, and the Key West Citizen. Dr. Mader is the recipient of the U.S. Fish & Wildlife Service Award, the UC Davis School of Veterinary Medicine Alumni Achievement Award, and the Fred L. Frye Lifetime Achievement Award for Veterinary Medicine, and is a seven-time winner of the North American Veterinary Community Speaker of the Year award and a four-time winner of the Western Veterinary Conference Educator of the Year award. He is also a fellow of the Royal Society of Medicine in the UK. Dr. Mader practiced in California for many years, but today lives and works in the Florida Keys.