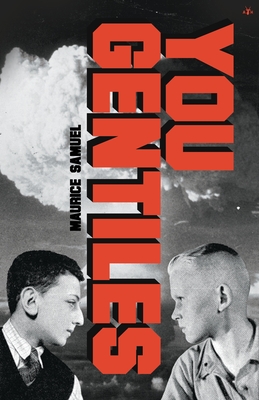 "We Jews, we, the destroyers, will remain the destroyers forever. Nothing that you will do will meet our needs and demands. We will forever destroy because we need a world of our own, a God-world, which it is not in your nature to build." Maurice Samuel

There has been no shortage of writings detailing an incompatibility between Jewish and Gentile peoples from a variety of sources and perspectives. Many of these fade with the circumstances that sparked them, but a few make lasting contributions to the understanding of millennia of conflict. Preserved by his own stature as a titan of Jewish literature, Maurice Samuel authored You Gentiles (1924), which persists as one of the most visceral and fundamental contrasts of Jews and non-Jews. Samuel writes with confidence as the recipient of several awards for his writing including the Anisfield-Wolf Book Award and the Itzik Manger Prize. With reference to his own deep familiarity with the collective Jewish experience, Samuel makes no qualifications for his belief in the spiritual, racial, and religious incompatibility of Gentiles with his own people. His thesis culminates in the ultimate rejection of any possible reconciliation between these two peoples.

Antelope Hill Publishing is proud to present Maurice Samuel's You Gentiles. With a foreword by evolutionary psychologist Kevin MacDonald, this piece is vital to understanding the conflict between the Jewish and the Gentile peoples.