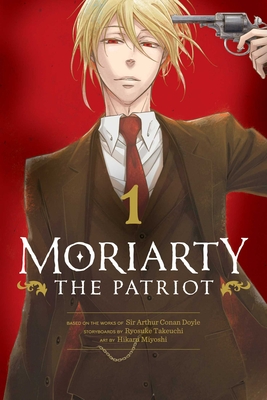 Before he was Sherlock’s rival, Moriarty fought against the unfair class caste system in London by making sure corrupt nobility got their comeuppance. But even the most well-intentioned plans can spin out of control—will Moriarty’s dream of a more just and equal world turn him into a hero…or a monster?

In the late 19th century, Great Britain rules over a quarter of the world. Nobles sit in their fancy homes in comfort and luxury, while the working class slaves away at their jobs. When young Albert James Moriarty’s upper-class family adopts two lower-class orphans, the cruelty the boys experience at his family’s hands cements Albert’s hatred of the nobility he was born into. He asks the older of the two boys—who has a genius mind and a killer instinct—to help him rid the world of evil, starting with Albert’s own family!

Ryosuke Takeuchi was born November 20, 1980, in Hyogo, Japan, and is a manga artist and writer. He got his big break in 2011 with ST&RS, his first serialized Weekly Shonen Jump series. He later did the storyboards for All You Need Is Kill.

Hikaru Miyoshi is a manga artist whose previous work includes Inspector Akane Tsunemori, which was based on the popular anime Psycho-Pass.

Takeuchi and Miyoshi began collaborating on Moriarty the Patriot in 2016.