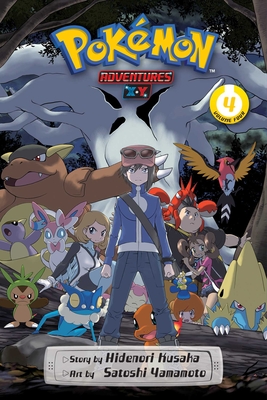 This is book number 4 in the Pokémon Adventures: X•Y series.

X was a Pokémon Trainer child prodigy. He hated being in the spotlight, so he took to hiding in his room and avoiding everyone—including his best friend Y. But now a surprise attack has brought X out of hiding!

The Legendary Pokémon Xerneas has transformed into a great tree, and whoever can possess it will also be in control of immense power! Meanwhile, Trainer Korrina has lost her battle, as well as her Key Stone. Feeling responsible for Korrina’s defeat, X retreats once more into his home. Will X’s friends ever get him to come back out of hiding again?!