Taste of Control: Food and the Filipino Colonial Mentality under American Rule (Hardcover) 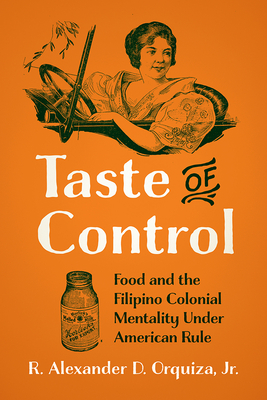 By René Alexander D. Orquiza, Jr.
$180.00
This item is backordered and not currently available. Please contact us for an estimated availability date.

Filipino cuisine is a delicious fusion of foreign influences, adopted and transformed into its own unique flavor. But to the Americans who came to colonize the islands in the 1890s, it was considered inferior and lacking in nutrition. Changing the food of the Philippines was part of a war on culture led by Americans as they attempted to shape the islands into a reflection of their home country.

Taste of Control tells what happened when American colonizers began to influence what Filipinos ate, how they cooked, and how they perceived their national cuisine. Food historian René Alexander D. Orquiza, Jr. turns to a variety of rare archival sources to track these changing attitudes, including the letters written by American soldiers, the cosmopolitan menus prepared by Manila restaurants, and the textbooks used in local home economics classes. He also uncovers pockets of resistance to the colonial project, as Filipino cookbooks provided a defense of the nation’s traditional cuisine and culture.

Through the topic of food, Taste of Control explores how, despite lasting less than fifty years, the American colonial occupation of the Philippines left psychological scars that have not yet completely healed, leading many Filipinos to believe that their traditional cooking practices, crops, and tastes were inferior. We are what we eat, and this book reveals how food culture served as a battleground over Filipino identity.

RENÉ ALEXANDER D. ORQUIZA, JR. is an assistant professor of history at Providence College in Rhode Island, where he teaches courses on nineteenth and twentieth-century U.S. history. His articles and essays have appeared in Food and Foodways, Asia Pacific Perspectives, Savoring Gotham: A Guide to New York Culinary History, and Eating Asian American: A Food Studies Reader.

“Taste of Control is an original, ambitious project that joins a growing body of scholarship that takes food as a window into analyzing American history and culture.”
— Mark Padoongpatt

“Taste of Control is a rare and refreshing example of how historians can (and must) make the past come alive with a sense of intellectual urgency and vibrancy.”
— Sarita Echavez See

"This revealing study explores in vivid detail the ways that food and food cultures in the Philippines under U.S. colonial rule—from the colonizers’ lavish banquets to cookbooks to domestic science classes to advertisements for imported canned foods—represented a significant site where the meanings of U.S. power were articulated and contested. Tapping into fresh primary sources, it provides a new and significant culinary lens onto the making of Philippine-American colonial hierarchies of race and civilization."
— Paul A. Kramer

"That Orquiza leaves us hungering for more of these connections is a testament to the strength of his research and the urgency of his work."
— Social History of Medicine

"Recommend[ed]. This book as it contains wide-ranging information on the mindset of the Americans in the colonial Philippines."
— Philippine Studies: Historical and Ethnographic Viewpoints