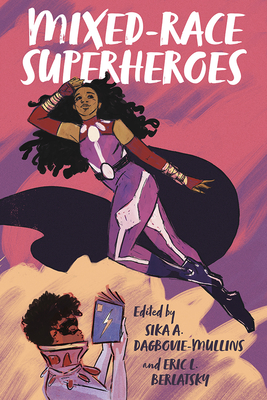 American culture has long represented mixed-race identity in paradoxical terms. On the one hand, it has been associated with weakness, abnormality, impurity, transgression, shame, and various pathologies; however, it can also connote genetic superiority, exceptional beauty, and special potentiality. This ambivalence has found its way into superhero media, which runs the gamut from Ant-Man and the Wasp’s tragic mulatta villain Ghost to the cinematic depiction of Aquaman as a heroic “half-breed.”

The essays in this collection contend with the multitude of ways that racial mixedness has been presented in superhero comics, films, television, and literature. They explore how superhero media positions mixed-race characters within a genre that has historically privileged racial purity and propagated images of white supremacy. The book considers such iconic heroes as Superman, Spider-Man, and The Hulk, alongside such lesser-studied characters as Valkyrie, Dr. Fate, and Steven Universe. Examining both literal and symbolic representations of racial mixing, this study interrogates how we might challenge and rewrite stereotypical narratives about mixed-race identity, both in superhero media and beyond.

SIKA A. DAGBOVIE-MULLINS is an associate professor of English at Florida Atlantic University in Boca Raton. Her publications include the book Crossing B(l)ack: Mixed Race Identity in Modern American Fiction and Culture.

ERIC L. BERLATSKY is a professor of English at Florida Atlantic University in Boca Raton, where he also serves as the associate dean of graduate studies and directs the Ph.D. program in comparative studies.  His books include The Real, the True, and the Told: Postmodern Historical Narrative and the Ethics of Representation and the edited volume Alan Moore: Conversations.

"How often do you read a book that you simultaneously think, I want to assign this to my graduate seminar, cite it in the piece I’m working on, and slip a copy to my teenage kid? Sika Dagbovie-Mullins and Eric Berlatsky’s Mixed-Race Superheroes shatters conventional notions of race, gender, and sexuality in the superhero genre while providing a deeply satisfying, critically engaging and eminently enjoyable read."

"While it has long been known that white supremacy was baked into the superhero at its origin some eighty years ago, this important collection of essays examines vibrant new works that reimagine and reinvent that troubled legacy. Through discussions of such figures as Miles Morales, the cinematic Valkyrie and Barack Obama, it advances the growing centrality of mixedness, mestiza consciousness and intersectionality in the transmedial twenty-first-century superhero genre. Given the realities of living in the post-2016 USA, this book couldn’t come at a better time."

"Dagbovie-Mullins and Berlatsky’s book is a unique and timely collection discussing superhero comics and films at the intersection of comics studies and critical mixed-race studies. The chapters provide valuable resources for scholars as well as students in multiple disciplines and interdisciplinary fields, and make a significant contribution to existing scholarship on racial mixedness in cultural productions."

"An insightful and transformative work. Mixed-Race Superheroes reveals the hidden possibilities of the superhero genre. Profoundly thoughtful and carefully researched, this volume uses the ubiquitous cultural language of the superhero genre and the complexity inherent to racial hybridity to illustrate crucial points about identity, community, and power in the United States. This volume uses a transmedia framework to bring characters, settings, and themes linked to superheroes into a dynamic and revealing conversation. This collection will be useful for researchers steeped in these issues while highlighting innovative points of inquiry for scholars new to the superhero genre."

"This scholarly, lucidly written, and timely book will be an invaluable resource for students, scholars, and a wider readership, the essays being accompanied by detailed end-notes, comprehensive lists of works cited, and an excellent index. The book will be essential reading for those in a wide variety of fields and disciplines, including critical mixed-race studies, social/cultural representations, comics studies, popular culture, and sociology, and also interdisciplinary studies."
— Ethnic and Racial Studies

"Well-argued and presents a fascinating angle for approaching the issue of mixed-race superheroes."
— International Journal of Comic Art