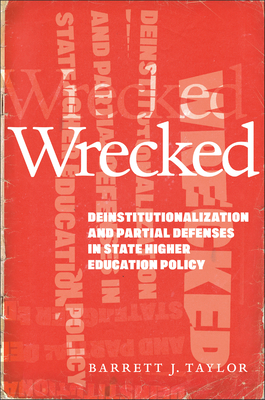 BARRETT J. TAYLOR is an associate professor of higher education at the University of North Texas in Denton. He is co-author with Brendan Cantwell of Unequal Higher Education: Wealth, Status, and Student Opportunity (Rutgers University Press).

"Taylor's Wrecked is a bold, unapologetic, and thought-provoking analysis and manifesto that addresses how the long-ignored elephants of race and partisan politics continue to shape higher education policy. A must-read for anyone interested in understanding and improving higher education equity in policymaking."
— Sosanya Jones

"Wrecked offers a compelling and instructive indictment about the rise of political and policy hostility of states toward higher education. Armed with a decade of data reflecting the political Right’s retreat from supporting public higher education, Barrett Taylor explains clearly and honestly its devastating effects. Implications for the future of college access and equity are sobering, yet hopeful in how we understand the complexities of social divisions and their political consequences. Wrecked demands our attention in addressing the collateral policy damage and the diminishing possibilities of higher education."
— James Earl Davis