A Contest of Principles (Star Trek: The Original Series) (Paperback) 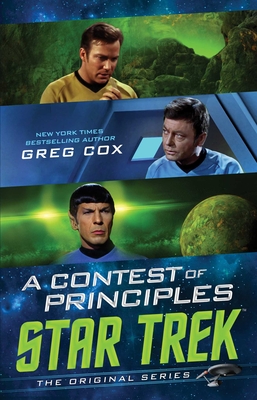 The planet Vok is holding its first free elections after years of oppressive military rule. Captain James T. Kirk and the crew of the Starship Enterprise have been dispatched by Starfleet to serve as impartial observers, but remaining neutral proves a challenge, as Kirk confronts a tangled web of scandal, conspiracy, and assassination plots—with the stability of an entire sector at stake.

To make matters worse, Dr. Leonard McCoy has vanished while on a mission of mercy to Braco, a nearby planet only a system away. With Kirk unable to abandon his vital mission on Vok to hunt for his friend, it’s up to First Officer Spock and Christine Chapel to lead a team in search of the missing doctor, even if it means risking whatever fate befell McCoy.

Unknown to his friends and crewmates, however, McCoy has been spirited away to another world, Ozalor, where he’s expected to find a cure for a mysterious ailment plaguing a member of the planet’s ruling family. Torn between his Hippocratic oath and his desire to escape, McCoy finds himself at the center of deadly palace intrigues—and a struggle for power that may ultimately consume all three worlds!

Greg Cox is the New York Times bestselling author of numerous Star Trek novels and short stories. He has also written the official movie novelizations of War for the Planet of the Apes, Godzilla, Man of Steel, The Dark Knight Rises, Daredevil, Ghost Rider, and the first three Underworld movies, as well as books and stories based on such popular series as Alias, Buffy the Vampire Slayer, CSI, Farscape, The 4400, Leverage, The Librarians, Roswell, Terminator, Warehouse 13, Xena: Warrior Princess, and Zorro. He has received three Scribe Awards from the International Association of Media Tie-In Writers, as well as the Faust Award for Life Achievement. He lives in Lancaster, Pennsylvania. Visit him at GregCox-Author.com.