The Winner's Curse: Paradoxes and Anomalies of Economic Life (Paperback) 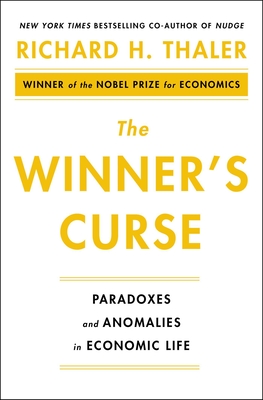 Nobel Prize–winning economist Richard H. Thaler challenges traditional economic paradigms and reveals the many paradoxes about human behavior and our transaction-based culture in this “interesting and entertaining” (The Wall Street Journal) work.

While the rationale behind economics always seems to be at the forefront of political and institutional life, many economic theories in relation to consumer behavior have not been studied in detail. Here, in The Winner’s Curse, Richard Thaler challenges today’s accepted economic wisdom by revealing many of the anomalies that abound even in simple economic transactions. He presents literate, challenging, and often funny examples of such variances as why the winners at auctions are often the real losers—they pay too much and suffer the “winner’s curse”—why gamblers bet on long shots at the end of a losing day, why shoppers will save on one appliance only to pass up the identical savings on another, and why sports fans who wouldn't pay more than $200 for a Super Bowl ticket wouldn’t sell one they own for less than $400. He also demonstrates that markets do not always operate with the traplike efficiency we impute to them.

Thaler argues that recognizing these sometimes counterintuitive facts of economic behavior will compel economists to adopt a more balanced view of human nature, one reflected in Adam Smith’s belief that, despite our selfishness, there is something in our nature that prompts us to enjoy, even promote, the happiness of others.

Richard H. Thaler received the 2017 Nobel Prize in Economic Sciences. He is the Ralph and Dorothy Keller Distinguished Service Professor of Economics and Behavioral Science at the University of Chicago’s Booth School of Business and director of the University of Chicago’s Center for Decision Research. He is a research associate at the National Bureau of Economic Research where he co-directs their behavioral economics project. He is the New York Times bestselling coauthor of Nudge: Improving Decisions about Health, Wealth and Happiness (with Cass Sunstein) and the author of Quasi Rational Economics. He is also one in a rotating team of economists who writes for the New York Times “Economic View” column.