Raw Deal: Hidden Corruption, Corporate Greed, and the Fight for the Future of Meat (Hardcover) 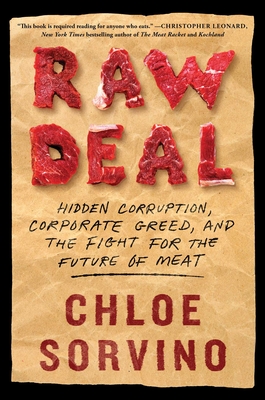 A shocking and unputdownable exposé of the United States meat industry, the devastating failures of the country’s food system, and the growing disappointment of alternative meat producers claiming to revolutionize the future of food. Perfect for fans of Kochland, The Meat Racket, and The Secret Life of Groceries.

Well before COVID-19 swept across the United States and the chairman of Tyson Foods infamously declared that the food supply chain was dangerously vulnerable, America’s meat industry was reaching a breaking point. Years of consolidation, price-fixing, and power grabs by elite industry insiders have harmed consumers and caused environmental destruction. Americans have no idea where their meat comes from. And while that’s hurting us, it’s also making others rich.

Now, financial journalist Chloe Sorvino presents an expansive view of the meat industry and its future as its fundamental weaknesses are laid bare for all to see. With unprecedented access and in-depth research, Raw Deal investigates corporate greed, how climate change will upend our food production, and the limitations of local movements challenging the status quo.

A journalistic tour de force that dives deep into one of America’s biggest and most vital industries, Raw Deal is a crucial and groundbreaking read that is sure to be a modern investigative journalism classic.

Chloe Sorvino leads coverage of food, drink, and agriculture at Forbes. Her work has been featured by NPR, Women’s Wear Daily, and the Financial Times. Find out more at ChloeSorvino.com and follow her on Twitter @ChloeSorvino.

"If you think you understand the meat industry, please think again. Chloe Sorvino provides a fascinating, gripping, and ultimately indispensable portrait of the powerful companies at the heart of our food system. This story is as shocking as it is revelatory, showing how the meat industry manipulates our political system, drives climate change, and hikes prices for American meals. This book is required reading for anyone who eats."
— Christopher Leonard, New York Times bestselling author of The Meat Racket and Kochland

"Raw Deal is Chloe Sorvino’s deeply reported, firsthand account of how business imperatives drive the meat industry to mistreat workers, pollute the environment, fix prices, bribe, and manipulate the political process, all in the name of shareholder profits. She argues convincingly for holding this industry accountable and requiring it and other corporations to engage in social as well as fiduciary responsibility. Raw Deal is a must-read for anyone who cares about where our food comes from."
— Marion Nestle, author of What to Eat and professor of nutrition, food studies, and public health, New York University

"Raw Deal is poised to become the next definitive authority on the current state of the broken food system in America and our desperate fight to curb climate change. Insightful as it is harrowing, what can often seem like an impossible hornet's nest to untangle is illuminated. Raw Deal will shake you into sharp presence while shining light on a road toward a decentralized, community-centered food system."
— Camilla Marcus, chef of Westbourne and cofounder of the Independent Restaurant Coalition

"Some meat-packers will hate this book, but it will force everybody to think. The big-is-fragile problem also applies to other industries such as electronic chips and baby formula."
— Temple Grandin, author of Animals in Translation

“Readers will gnash their teeth at Sorvino’s vivid accounts of rapacious billionaires and the half-dozen mega-corporations that dominate the industry, pollute waterways, and exhaust farmland under the very gentle hand of government regulators… Convincing, often enraging, and no more optimistic than the facts call for.”
— Kirkus Reviews

“This is a deeply informed and eye-opening call for change.”
— Publisher’s Weekly

“A journalist who has spent nearly a decade covering food and agriculture for Forbes, Sorvino lays bare the inner workings of the meat industry with clear-eyed practicality—from the scale of the environmental cost of meat to the depths of corporate greed and consolidation of power.”
— Modern Farmer

“Packed with a wide range of expert input, Raw Deal provides a firsthand look into a typically opaque industry and makes the case that changing our meat industry is both possible and necessary.”
— Civil Eats

“Raw Deal is a meticulously researched account of what’s wrong with today’s meat industry and how we might overhaul it… What sets the book apart from many others in this genre is Sorvino’s excellent deep dive into how the world’s largest meat companies and retailers have been deploying illegal and irresponsible practices — including bribery, corruption and collusion — to grab, hold on to and expand power and profits at the expense of people and the planet.”
— Green Biz

“Sorvino’s captivating discoveries convey the vulnerabilities of a powerful part of the food system and the effects of this broken industry.”
— Food Tank