Hell's Half-Acre: The Untold Story of the Benders, a Serial Killer Family on the American Frontier (Hardcover) 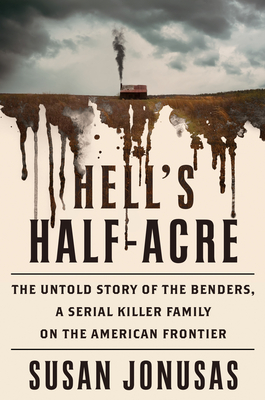 "Rich in historical perspective and graced by novelistic touches, grips the reader from first to last.”—Wall Street Journal

A suspense filled tale of murder on the American frontier—shedding new light on a family of serial killers in Kansas, whose horrifying crimes gripped the attention of a nation still reeling from war.

In 1873 the people of Labette County, Kansas made a grisly discovery. Buried by a trailside cabin beneath an orchard of young apple trees were the remains of countless bodies. Below the cabin itself was a cellar stained with blood. The Benders, the family of four who once resided on the property were nowhere to be found. The discovery sent the local community and national newspapers into a frenzy that continued for decades, sparking an epic manhunt for the Benders.

The idea that a family of seemingly respectable homesteaders—one among the thousands relocating farther west in search of land and opportunity after the Civil War—were capable of operating "a human slaughter pen" appalled and fascinated the nation. But who the Benders really were, why they committed such a vicious killing spree and whether justice ever caught up to them is a mystery that remains unsolved to this day. Set against the backdrop of postbellum America, Hell’s Half-Acre explores the environment capable of allowing such horrors to take place. Drawing on extensive original archival material, Susan Jonusas introduces us to a fascinating cast of characters, many of whom have been previously missing from the story. Among them are the families of the victims, the hapless detectives who lost the trail, and the fugitives that helped the murderers escape.

Hell’s Half-Acre is a journey into the turbulent heart of nineteenth century America, a place where modernity stalks across the landscape, violently displacing existing populations and building new ones. It is a world where folklore can quickly become fact and an entire family of criminals can slip through a community’s fingers, only to reappear in the most unexpected of places.

Susan Jonusas attended the University of St Andrews and holds a master’s in science, technology and medicine in history from Kings College London. During her master’s she focused on the intersection between crime and technology in the nineteenth century. She was a bookseller, but now spends her free time on the archery range. This is her first book.

"Spending hours combing archives for new clues is one thing; fashioning that work into a vivid narrative is quite another. Jonusas excels at both."—The New York Times Book Review's "The Best True Crime of 2022"

"Rich in historical perspective and graced by novelistic touches, grips the reader from first to last. . . . Jonusas discovered several further leads in official archives and correspondence, enough to transform “Hell’s Half-Acre,” at the halfway point, from a gothic popular history into a Wild West chase full of extraordinary developments.”—Wall Street Journal

“Jonusas, who parsed archival records in order to craft this riveting reconstruction, is especially good at dismantling some of the most salacious rumors surrounding the Bender daughter, Kate.”—The New York Times

"An impressive and deeply unsettling account of the Benders . . . Radiant prose (“Creeks, dancing and clear, divide vast expanses of prairieland rolling toward the sky”) enhances the page-turning narrative. The combination of true crime and a vivid depiction of frontier life earn this a spot on the shelf next to David Grann’s Killers of the Flower Moon."—Publishers Weekly (starred review)

“[Jonusas] ably captures the dangers involved in the westward trek that so many of the Benders’ victims did not live to see through . . . it’s a story that, grisly and unsolved, fascinates . . .”—Kirkus Reviews

“Dark and bloody, hard-nosed but lyrical, Hell’s Half-Acre is a true-crime mass-murder mystery from the Old West. Susan Jonusas has stripped down a notorious story, researched it to hell and back, and rebuilt in prose so immediate and immersive that it feels like she must have been there. Beware the Benders, but all hail Susan Jonusas. This is a stunning debut from a great and powerful new voice in narrative non-fiction.”—Dan Jones, New York Times bestselling author of The Templars and The Plantagenets

"Hell's Half-Acre is a mesmerizing combination of gory mass murder and frantic pursuit of diabolical perpetrators, presented in some of the best, most atmospheric context I have ever read in any narrative nonfiction about the American frontier. This saga of the 'Bloody Benders' will keep you reading - and flinching - until the last page is turned. Then you'll want to read it all over again."—Jeff Guinn, author of The Last Gunfight: The Real Story of the Shootout at the O.K. Corral-And How It Changed the American West