The Magic of Handwriting. the Corrêa Do Lago Collection (Hardcover) 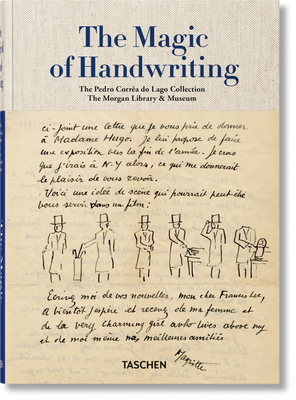 Handwriting works magic: it transports us back to defining moments in history, creativity, and everyday life and connects us intimately with the people who marked the page. For nearly half a century, Brazilian author and publisher Pedro Corr a do Lago has been assembling one of the most comprehensive autograph collections of our era, acquiring thousands of handwritten letters, manuscripts, and musical compositions as well as inscribed photographs, documents, and drawings.

From an 1153 parchment signed by four medieval popes to a 2006 thumbprint signature by physicist Stephen Hawking, the items illustrated here span nearly nine hundred years, and along the way bring us up close and personal with writers, artists, composers, political figures, performers, explorers, scientists, philosophers, and rebels whose actions and creations have made them legends.

Rather than focusing on a single era or subject, Corr a do Lago made the ambitious decision to seek important autographs in eight broad areas of human endeavor--art, history, literature, science, music, philosophy, exploration, and entertainment. The 140 extraordinary selections gathered in this book--displayed for the first time in a major exhibition at New York's Morgan Library and Museum--include letters by Lucrezia Borgia, Vincent van Gogh, and Emily Dickinson, annotated sketches by Michelangelo, Jean Cocteau, and Charlie Chaplin, and manuscripts by Giacomo Puccini, Jorge Luis Borges, and Marcel Proust.

Handwriting is one of the most visceral means by which we leave tracks of our existence. At a time when so much of our communication has become utterly immaterial, this collection conveys the power of the pen to illuminate the energy, passion, vulnerability, and imagination of humankind across the ages.