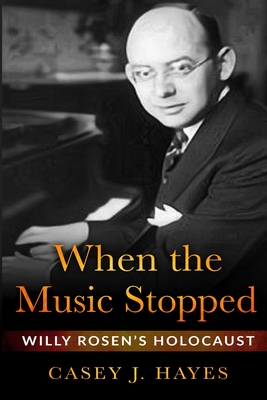 When music is your only chance of survival

Despite his success as a renowned songwriter, composer, and cabaret player, Willy Rosen's life was interrupted when his Jewish status leads him to flee Germany to the Netherlands as a result of growing Nazi powers.

His escape to relative safety is short-lived when he is captured and deported to the Westerbork transit camp. Willy Rosen tries to avoid - or at least delay - death in a concentration camp for him and his theater group by performing for commandant Gemmeker and their fellow prisoners. Such a fragile existence demanded that every show be better than the one before; an ultimate test of skill and talent. Every dance, every song, and every performance reminded them that their lives were at stake, that they could easily be eradicated if they didn't put a smile on their oppressor's face. Rosen's cabaret group survived with this incessant fear for two years. They were among the last to be sent on transport east.

When the Music Stopped is a fictionalized historical account that follows the inspiring life of Willy Rosen from his time as a celebrated German soldier in WWI, a famous entertainer, and finally, a victim of Auschwitz's gas chambers. It is a heart-warming yet tragic story that reminds us that beauty can exist amidst horror.