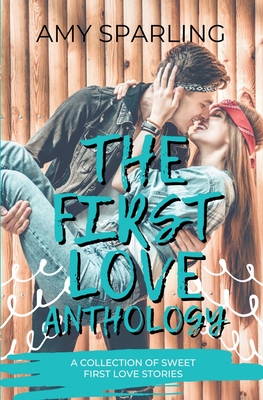 The First Love Anthology is a collection of five novellas about first love. These quick, romantic teen reads are perfect for anyone who loves a good story about finding your first love. They can be read in order or as standalone stories.

This anthology includes:
** The Text Dare Sixteen-year-old Jess Parker is stuck babysitting her little brother all weekend, which is why she accepts her best friend's dare: to text the random phone number they found written on a lost piece of algebra homework. When the owner of the number texts back, Jess and Max hit it off through their anonymous conversation. The last thing Jess expected was to spend her boring weekend texting the guy of her dreams, and now that she's crushing hardcore on a guy she's never met, she hopes he's actually the guy he claims to be. **My Un-Famous Neighbor Shelby Cross lives in the literal middle-of-nowhere. The only time people come to her town is because they run out of gas or make a wrong turn. So when a dangerously cute boy and his mom show up at her parent's diner one morning, it's a surprise when they announce they plan on living there. Shelby knows that only people with secrets move to the middle-of-nowhere, and she's right. Clay Thompson has a pretty big secret. He used to be famous. ** Heartbreaker Mae Warren is a heartbreaker. Starting with her first boyfriend in seventh grade to the most recent victim in her senior year, Mae can't date a guy longer than two weeks before she's tired of him. She doesn't see a problem until her BFF Jacie challenges her to date someone for an entire month. Determined to win this bet, Mae chooses to date Jaxon, the guy who's crushed on her for years. This should be easy...right? **The New Guy Dance class is no joke for sixteen-year-old Asha Bronte. She's been elected as an officer for the class, which is a huge responsibility and honor, and she's not going to screw it up. She has goals in life, and her family is worse than broke, so the only way she's going to college is on a scholarship. Her academics and extra-curricular activities have totally taken over her life. Liam Bavaro just moved to town and his first day of school isn't going so well. The only elective class available is dance. Dance class? He'd rather drop out and live life as a bum than ever step foot in a tutu or tights. The cute girl at the sign up table clearly doesn't want him to join her class, either. And, well, now Liam can't say no. ** For Just One Day Emma has better ways to spend her Friday night, but unfortunately she's stuck at a museum with her mom and her mom's new boyfriend. When she slips away and the lights go out, Emma finds herself locked in the ancient building with no cell phone and no way out. Jaxxon is on a mission to find something he lost in the museum before it closes. What he finds instead is a pretty girl who is accidentally locked inside the building with him. They're both dealing with their own issues, but for just one night, they'll have to set it aside and figure out how to rescue themselves.