These Walls Can Talk

Master photographer and Punta Gorda resident, David Sussman, in conjunction with Sandman Books, has begun a monthly discussion called PhotoTalk. The casual format offers photographers of all skill levels the opportunity to discuss the craft of photography in an informal setting.

PhotoTalk is held at Sussman’s gallery, located within Sandman Books at their new location on Duncan Road east of Punta Gorda. The space is a perfect multi-use venue to accommodate up to several dozen people. Mr. Sussman and his wife, Mary Ann Tipton, were on hand to greet attendees before the start of the most recent PhotoTalk on Thursday, Dec. 12. That night, nine fellow photographers gathered with Mr. Sussman to talk shop and listen to his insights gathered over a nearly fifty-year career as a photographer.

“Right out of high school, I had the promise of being a produce manager at a grocery store,” Mr. Sussman said with a chuckle. “And I thought that was the life, man, I was going to be a boss.” Fortunately for Mr. Sussman and anyone who appreciates art, he had a neighbor in Maryland who worked at the at Johns Hopkins University Applied Physics Lab and offered to secure a job for him. 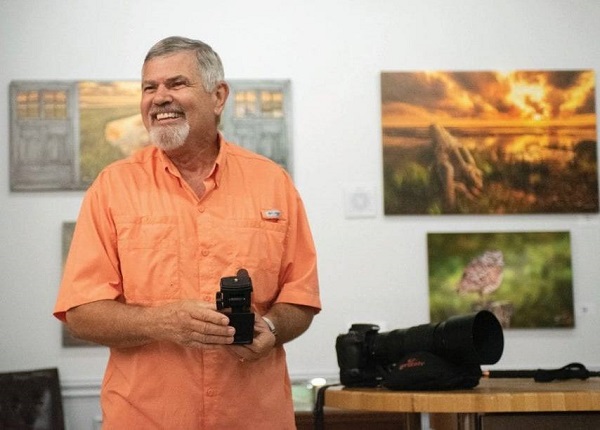 “She was after me for almost a year,and I finally said, ‘yeah,’” Mr. Sussman recalled. “Landed in the photo lab. Gotta love that.”

At the time, Mr. Sussman had never taken a photograph in his life. He began his career making prints in the processing lab in black and white, color, transparencies and on various types of metals, which he described as “stinky work,” due to the various chemicals involved. He worked his way up through the photography department over a ten-year period, dabbling with cameras along the way.

His innate interest in being more creative led him to experiment with the tools at hand. His portfolio includes some truly amazing images, especially considering they were made with multiple exposures on a single negative and plenty of trickery in the dark room. The same images, in today’s world of digital photography and powerful editing software, are merely a matter of watching a few YouTube videos, utilizing some stock photography and putting in a little practice. But Mr. Sussman’s painstaking images of the time graced the covers and pages of many of the University’s catalogs, journals and trade publications. 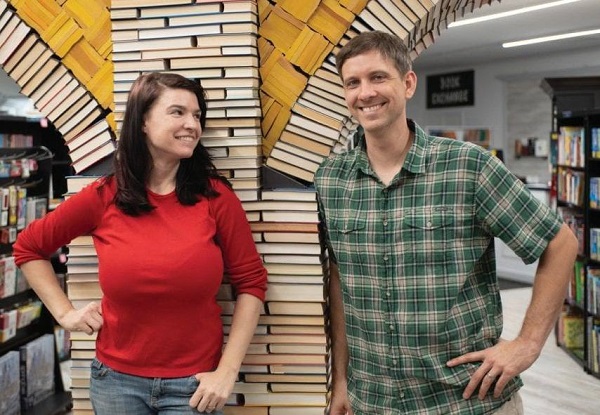 Throughout his 30-year career at Johns Hopkins, to his contract work with various global technology companies and even the U.S. Navy, Mr. Sussman has been in the unique position of being able to dictate the gear he was able to use, and always on someone else’s dime. “Even today, the main reason I stay involved in photography,” Mr. Sussman explained, “is so I can buy the next generation of whatever it is. I love playing around with gear. It’s always been in my blood, I guess.”

In its infancy, digital photography was exceedingly expensive and considered by many experienced photographers to be akin to witchcraft. “Back then, a 2-megapixel camera would cost you $15,000,”
Mr. Sussman said. Most modern cell phones feature cameras in the neighborhood of 12 megapixels. Consumer- and professional-grade digital cameras are 24, 45 or even higher in megapixel count. Those resolutions make it possible to print images that are dozens of feet high or across while retaining stunning clarity.

The fact that Mr. Sussman literally helped to usher in the digital age of photography on the front lines makes him the perfect vessel for passing all that knowledge on to the next generation shutterbugs. “That’s how Photo-Talk came about,” said Mr. Sussman’s wife, publicist and manager, Mary Ann Tipton. “It’s good for him to speak with other photographers.”

“I’ve had exposure to every kind of photography there is,” Mr. Sussman said. “I’ve had access to some of the highest end cameras you could ever want.” But that is not to say that PhotoTalk is geared only to proficient photographers.

“It’s not all top-end (knowledge),” Ms. Tipton promised. Amateurs, intermediate level photographers, and professionals — or even those with nothing more than a cell phone camera, can all learn something and enjoy some camaraderie.

Indeed, Mr. Sussman was deliberate during PhotoTalk to encourage participants to ask any questions they had, and he took time and care to answer each question candidly. His presentation began with a discussion of utilizing software to adjust the parameters of a digital photo. He used a television screen mounted over the corner of the gallery to display before and after versions of several of his images. Though the photos were merely slides in a prepared presentation, Mr. Sussman promised to perform a live demonstration of the software’s capability at a future PhotoTalk, if the attendance reaches 20 or more people.

Mr. Sussman then shared a few inexpensive tools of the trade to make photography in the field easier. He displayed a telescoping monopod purchased on Amazon, a bean bag on which to rest a long lens when he’s shooting from the car, and tripod heads used to pan and tilt the camera, even a pricey high-end gimbal to steady very heavy lenses. This segment also included tips on using the photographic environment, like trees or walls, to steady a shot in the absence of a tripod.

The discussion concluded with Mr. Sussman’s tips on photographing birds and night photography. Throughout the talk, Mr. Sussman answered each question as it was posed. Both Mr. Sussman and Ms. Tipton stressed that the format is designed to be interactive. PhotoTalk is not meant to be a lecture; it’s a conversation among photography enthusiasts.

The David Sussman Gallery is a symbiotic relationship between Mr. Sussman and Ms. Tipton and Scott Hill and Heidi Lange, owners of Sandman Book Company. Their mutual admiration of each other’s talents let to Mr. Sussman photographing Ms. Lange’s creations as a seamstress. Ms. Lange creates stunning period and character costumes for cosplay and Sandman’s own Storytime series on the first Saturday of each month.

Mr. Hill’s talents shine in the carpentry department. When the time came to relocate the couple’s 13-year-old bookstore, formerly located on Burnt Store Road, Hill built all of the architectural details inside the new location, from a new version of the iconic book archway, to a jail cell for banned books and erotica, to the exterior-facing window displays and the David Sussman Gallery itself.

“We gave David the best space in the store,” Ms. Lange admitted, “because it’s up front and to the right, which is the first place everyone goes.”

Mr. Sussman and Mr. Hill worked closely together on the creation of the gallery, and the space serves multiple uses inside the store. Both are confident it will benefit each party and serve to increase each other’s traffic. Mr. Sussman and Ms. Tipton lease a 300-acre ranch off Bermont Road, just a few miles from the bookstore. This close proximity means that he can be at the store within minutes if someone is interested in purchasing one of his photographs hanging in the gallery. And people coming to the gallery are likely to stay and browse the bookstore once they catch a glimpse of Mr. Hill’s handiwork.

Mr. Sussman’s PhotoTalk is held at the David Sussman Gallery inside Sandman Books on the second Thursday of each month, from 5:30 p.m. to 6:30 p.m. January’s PhotoTalk takes place on Thursday Jan. 9. Admission is free of charge, but attendees are asked to RSVP. More information is available at www.dwsussman.com

<< Back to News Archive