Twenty-eight children politely wait in a semi-circle. Their patience is rewarded when a costumed man arrives: the Fairy Tale Teller (aka Douglas Coventry) is here to tell a story with the help of his friends, the Sandman Storytime princesses. THe kids cheer as he introduces Maid Marian, Cinderella's Fairy Godmother, Princess Ana and her sister the Snow Queen.

But when he announces the fairy, Tinker Belle, the doorway remains empty! He calls a second time - and a third. Anxious boys and girls strain to see behind the curtain. Desparate to avoid disappointment, the Fairy Tale Teller enlists the children's help.

"She must be stuck! We have to call her together!" The other princesses and many watching parnets join the children's chorus of "Tinker Belle! We do belive in fairies! Tinker Belle!"

Of course, Tinker Belle respons to the classic plea, and she is revealed to have been hiding in the back of the audience all along. Sporting a four foot wingspan and a poofy blond bun, cosplayer Makala McClannan perfectly portrays the spunky out expected from the character.

After the show, guests line up to meet the characters. The costumed volunteers greet each child by name, post for photos and give away stickers. Upon discovering that one girl is celebrating her birthday, they break into song.

Sandman Storytime is a free event sponsored by Sandman Books in Punta Gorda. Coventry, who runs a children's theater program in Fort Myers, directs the monthly show. The cast of characters varies with each production, but Tinker Belle is a fan favorite and McClannan returns as often as her schedule allows. 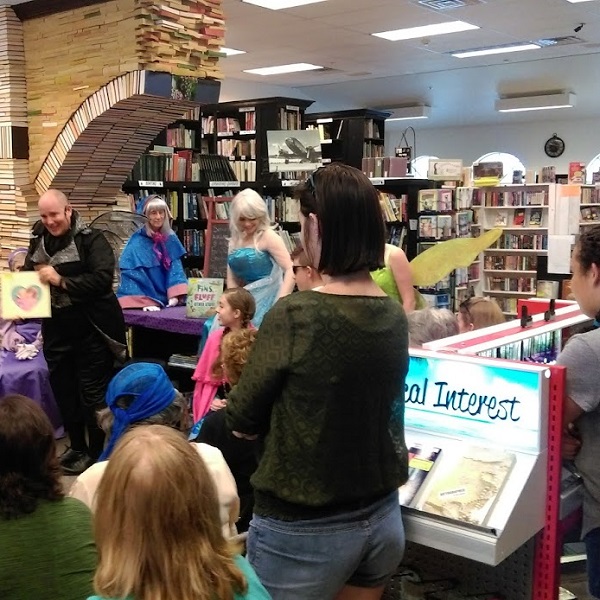 << Back to News Archive