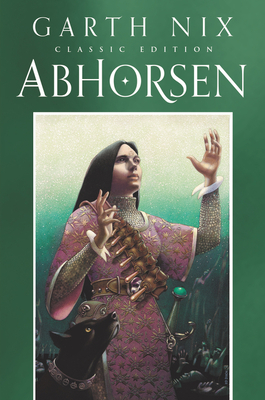 This is book number 3 in the Old Kingdom series.

What began with Sabriel 25 years ago comes to an unforgettable conclusion to the Old Kingdom Trilogy in Abhosren by master of fantasy and globally bestselling Garth Nix, now available in a special anniversary edition with original art by Leo and Diane Dillon.

The last hope for the living.

The Abhorsen Sabriel and King Touchstone are missing, leaving only Lirael—newly come into her inheritance as the Abhorsen-in-Waiting—to stop the Destroyer. If Orannis’s unspeakable powers are unleashed, it will mean the end of all Life. With only a vision from the Clayr to guide her and the help of her companions—Sam, the Disreputable Dog, and Mogget—Lirael must search in both Life and Death for some means to defeat the evil destructor . . . before it is too late.

“This title has a cinematic sweep; the tense, climactic confrontation pulls from the very beginning into a tightly constructed, satisfying conclusion.”  —BCCB