Martin the Warrior: A Tale from Redwall (Paperback) 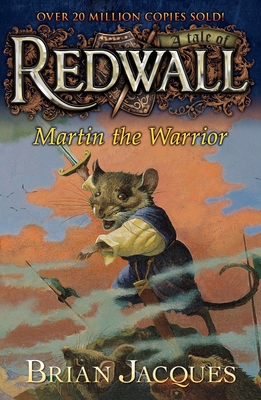 This is book number 6 in the Redwall series.

Soon to be a Netflix original series!

The battle for freedom begins now, as the adventure continues in the stunning world of Redwall.

On the shore of the Eastern Sea, in a cold stone fortress, a stoat named Badrang holds dozens of innocent creatures as slaves, part of his scheme to build an empire where he will rule as unquestioned tyrant.  Among those slaves is a mouse named Martin who has a warrior's heart and a burning desire for freedom-freedom not only for himself, but for all of Badrang's victims.  There is no risk he will not take, no battle he will not fight, to end the stoat's evil reign and in the process regain the sword of his father, Luke the Warrior, the sword that Badrang stole from him when he was but a lad!

Brian Jacques (www.redwallabbey.com) was born in Liverpool in 1939. He left school at age fifteen and found work as a docker, a truck driver, a policeman and a stand-up comic, all before turning his attention to writing. He wrote his first novel, Redwall, for the children at a school for the blind in Liverpool. Since 1986, his descriptive style of writing has captivated readers from age 8 to 80. His books have won international awards and acclaim and have been made into a TV series. He died in 2011.