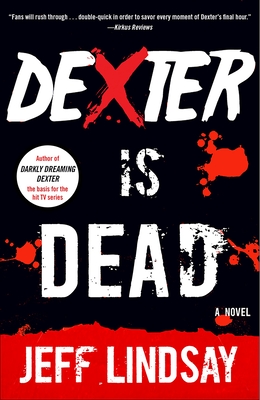 This is book number 8 in the Dexter Series series.

Dexter Morgan—blood-spatter analyst, husband, father, serial killer—knew that he couldn’t burn the candle at both ends forever, and now, his dark deeds have finally ensnared him. • The Killer Character That Inspired the Hit Showtime Series Dexter

He is in prison on multiple homicide charges, although, ironically, he did not commit any of the murders of which he is accused. He’s lost everything: his wife, kids, career, and the loyalty of his sister. Now his sole, small shot at redemption may come from his brother, Brian, a homicidal maniac who makes Dexter look like the angel in the family. By helping Brian through some serious trouble of his own making, Dexter sees a potential path to proving himself innocent.

But the stakes are truly deadly. And, with nothing left to hold him back, Dexter hurtles into an epic showdown ... which may be his last.

Jeff Lindsay is the New York Times bestselling author and creator of the Dexter novels, most recently Dexter's Final Cut. He lives in south Florida with his wife and three daughters. His novels are the inspiration for the hit Showtime series Dexter.

“Fans will rush through . . . double-quick in order to savor every moment of Dexter's final hour.”
—Kirkus Reviews

"Jeff Lindsay has brought his 'A' game to this farewell, wrapping things up in fine fashion."
–Bookreporter


Praise for the Dexter series

“It’s like very little else you’ve read. Imagine if Hannibal Lecter starred in CSI: Miami instead of David Caruso, and you’re halfway there.”
—Time

“Dexter’s sardonic voice [is] so snappy and smart, and yet so full of self-loathing that we hate ourselves for laughing.”
—The New York Times Book Review

“One of the most likable vigilante serial killers in recent thriller literature.”
—The New Yorker

“Like a breath of fresh air blowing across all of crime-novel conventions, there is Dexter.”
—The Denver Post

“Wonderfully fresh and packed with just the right amount of grotesquerie and wry wit.”
—USA Today

“An entertaining, funny series that draws us in and makes us root, almost against our will, for a ruthless, yet appealing killer. In his own way, Dexter is trying to make the world a better place.”
—Sun-Sentinel (Ft. Lauderdale, Fla.)

“May be the first serial killer who unabashedly solicits our love.”
—Entertainment Weekly