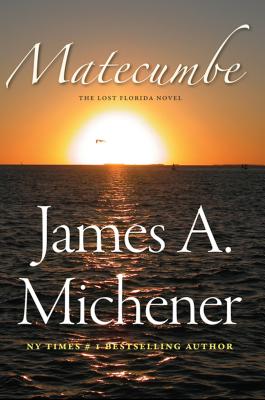 Pulitzer Prize-winning author James A. Michener was in his sixties when he began traveling frequently to the Florida Keys. One result of those visits was the novel Matecumbe, named after two of the islands that comprise the town of Islamorada, located approximately half way between Miami and Key West. Never before published, Matecumbe features many of the hallmarks of Michener's best work, including detailed descriptions of place. However, the plot is much more intimate than that found in most of his large-scale, epic historical novels. Focusing on the parallel lives of a woman and her mother, both divorced, Michener spent his creative energy on character development and allegorical storytelling. Random House, his publisher, wasn't pleased, and wanted the mega-best-selling author to concentrate on producing "heavyweight" books like Hawaii and Centennial. Matecumbe seemed too much in the vein of his earlier romance novel, Sayonara. So it sat in a drawer until, eventually, Michener gifted it--including the copyright--to Joe Avenick, his friend and former ghostwriter. Avenick played a key role in the research and writing of Sports in America and Chesapeake, and introduced Michener to Melissa (Missy) DeMaio, who soon became the primary reason for Michener's increasingly frequent visits to the Keys. Biographers and critics have long agreed that Michener's personality and his characters were both affected by his relationship with DeMaio. As perhaps his most encompassing autobiographical novel, and the one written in the midst of these changes, Matecumbe provides what may be tantalizing glimpses into Michener's life. The publication of Matecumbe, in the centennial year of the author's birth, will be a boon for fans who have longed for more Michener in the ten years since his death.