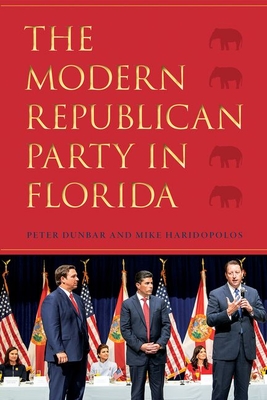 Despite Florida's current reputation as a swing state, there was a time when its Republicans were the underdogs against a Democratic powerhouse. This book tells the story of how the Republican Party of Florida became the influential force it is today. Republicans briefly came to power in Florida after the Civil War but were called "carpetbaggers" and "scalawags" by residents who resented pro-Union leadership. They were so unpopular that they didn't earn official party status in the state until 1928. Peter Dunbar and Mike Haridopolos show how, due largely to a population boom in the state and a schism in the Democratic Party, Republicans slowly started to see their ranks swell. This book chronicles the paths that led to a Republican majority in both the state Senate and House in the second half of the twentieth century and highlights successful campaigns of Florida Republicans for national positions. It explores the platforms and impact of Republican governors from Claude Kirk to Ron DeSantis. It also looks at how a robust two-party system opened up political opportunities for women and minorities and how Republicans affected pressing issues such as public education, environmental preservation, and criminal justice. As the Sunshine State enters its third decade under GOP control and partisan tensions continue to mount across the country, this book provides a timely history of the modern political era in Florida and a careful analysis of challenges the Republican Party faces in a state situated at the epicenter of the nation's politics.